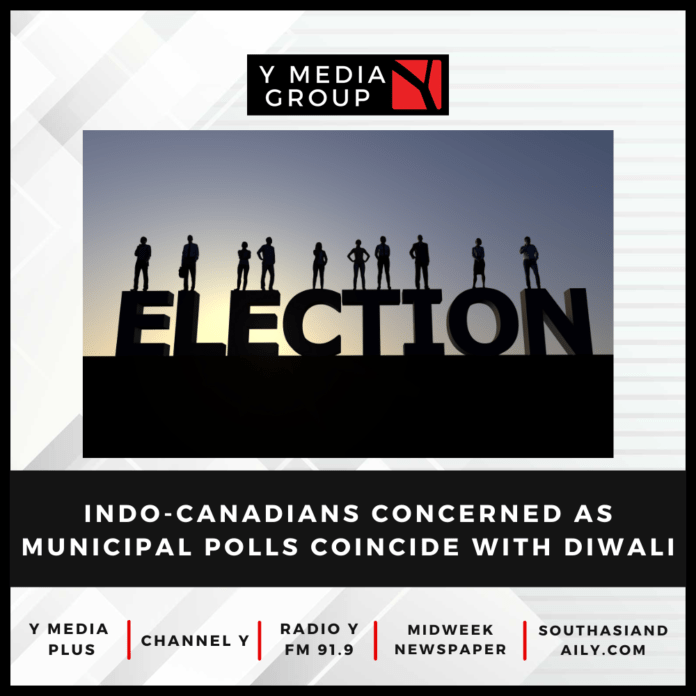 With the Canadian Municipal elections falling on October 24 — the same day as Diwali — Indian-origin community, including councillor candidates, are raising concerns over the two events overlapping.

There is no nationwide public holiday on Diwali in Canada but it is one of the most-awaited festivals celebrated by the large swathe of Indian diaspora present in the North American country.

About 500,000 people celebrate the festival of lights in Canada, mostly Hindus, Sikhs and Jains.

“A lot of people who would typically vote after work also would be participating in Diwali celebrations, which tend to be in the evening,” Ryan Singh, chair of the Indo-Caribbean Canadian Association, told CTV News Toronto.

“So people will probably prioritize being with their families and loved ones, especially after the Covid-19 pandemic rather than voting,” Singh added.

Elections for municipal government are held every four years on the fourth Monday of October, which falls on October 24 this time. These polls usually elect a mayor and city council and sometimes also a school board.

“Brampton city must take a step to consider the main festivals and events of its diverse population,” Vijay Mair, a candidate from Brampton, told Omni TV.

“It is very problematic that the elections are taking place on the Diwali day, especially the municipal election that has always seen a low voter turnout,” Gurpratap Singh Toor, councillor candidate from Brampton, said.

This is not the first time that an election day has coincided with a festival. In 2019, the federal election fell on October 21, during the Jewish holiday, Shemini Atzeret.

Mair, however, told people to vote in huge numbers as “Diwali comes every year but elections happen once in four years”.

“Since most of the Diwali celebrations happen in the evening into the night, I don’t think it will be as disruptive as to cause low voter turnout,” Param Singh, an Ottawa mayoral candidate, told Capital Current.

Diwali celebrations kicked off in Canada with the revealing of a Diwali-themed stamp earlier this month. The stamp design highlighted two traditions central to the celebration of Diwali: fireworks displays and the lighting of diyas.

Apart from a Diwali party cruise, the Indo-Canada Arts Council is hosting musical symphony fireworks at Harbourfront in Toronto, which began on October 22.