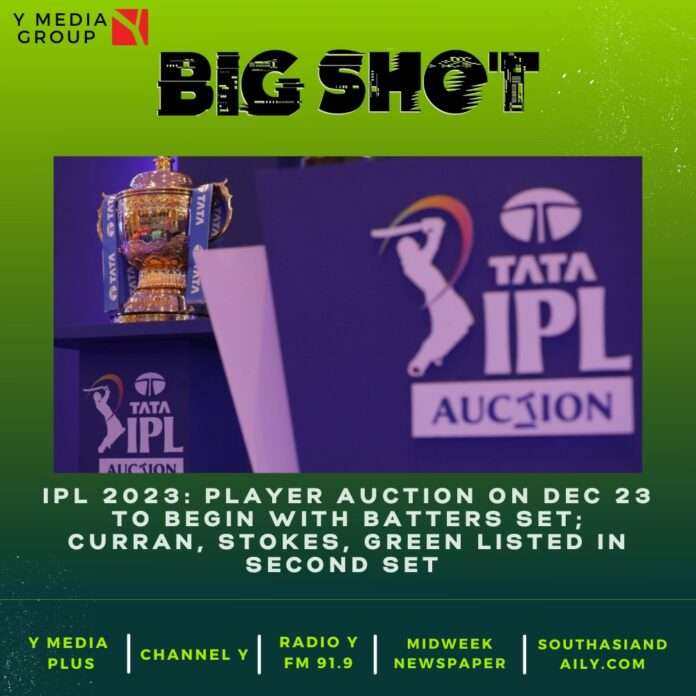 The IPL 2023 Player Auction on December 23 in Kochi will begin with the batters’ set which features Indian opener Mayank Agarwal, Kane Williamson and the England pair of Joe Root and Harry Brook while the top all-rounders of modern-day cricket — Ben Stokes, Sam Curran, Cameron Green — have been listed in the second set, the league announced on Tuesday.

A total of 405 cricketers will go under the hammer during the IPL Player Auction, beginning at 1430 hrs IST.

Initially, a total of 369 players were shortlisted by 10 teams from the initial list of 991 players. Thereafter, thirty six additional players were requested by teams, which are added into the final list which makes a total of 405 players which will be presented at the IPL 2023 Auction, a media release from the league said.

As per the norm, the auction will begin with capped players going under the hammer. The IPL has created the order by breaking up the list into different sets based on the specialisation. The order are: batters, allrounders, wicketkeeper-batters, fast bowlers and spinners. The same order will be followed for the uncapped players.

England skipper Stokes, who has listed his base price at Rs 2 crore, remains a strong contender to bag the most expensive player reward only because he is a proven serial match-winner and gives a captaincy option as well.

The franchises will also keep their eye on Aussie all-rounder Green, who has also listed his base price at INR 2 crore. His power-hitting during the white-ball series in India recently made him an instant attraction for IPL teams.

Meanwhile, Curran, who was named player of the match for his 3-12 in England’s T20 World Cup victory over Pakistan and was also player of the tournament, will also be one of the most sought after players in the auction. The all-rounder has done well for CSK in the previous seasons of IPL.