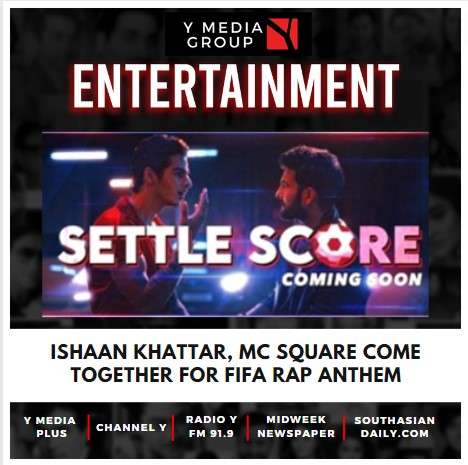 ‘Hustle 2.0’ winner MC Square and Bollywood actor Ishaan Khattar have collaborated for FIFA rap anthem. They will be releasing a video dedicated to FIFA World Cup 2022 in which they can be seen in the look of football players portraying their various emotions of excitement and tension during the game.

A 23-year-old rapper Abhishek Baisla, who is better known by his stage name MC Square, talked about the collaboration and said: “Ishaan has been supporting and encouraging me since the beginning of ‘Hustle 2. Working with him has been a fun ride since he has a very good understanding of music as well as football.”

MC Square is a civil engineer by profession but his first love always remains music. He further shared about his experience of working with Ishaan. “Collaborating with him has been a great experience because he is such a fun-loving person and I am looking forward to the reactions of his and my fans together.”

‘A Suitable Boy’ actor also added that shooting with MC Square was all fun and a great experience. Ishaan was first seen as a child actor in ‘Vaah! Life Ho Toh Aisi!’ and later also did ‘Udta Punjab’, ‘Beyond The Clouds’, ‘Dhadak’, ‘Phone Bhoot’, and many more.

“MC Square is a rare talent and I’m a champion for his musical journey. He’s also a sweetheart and I had a great time shooting with him. The world cup’s energy has been infectious so far and the quirky music video celebrates that,” he added.

The rap video featuring MC Square and Ishaan Khattar will be released on MTV HD.