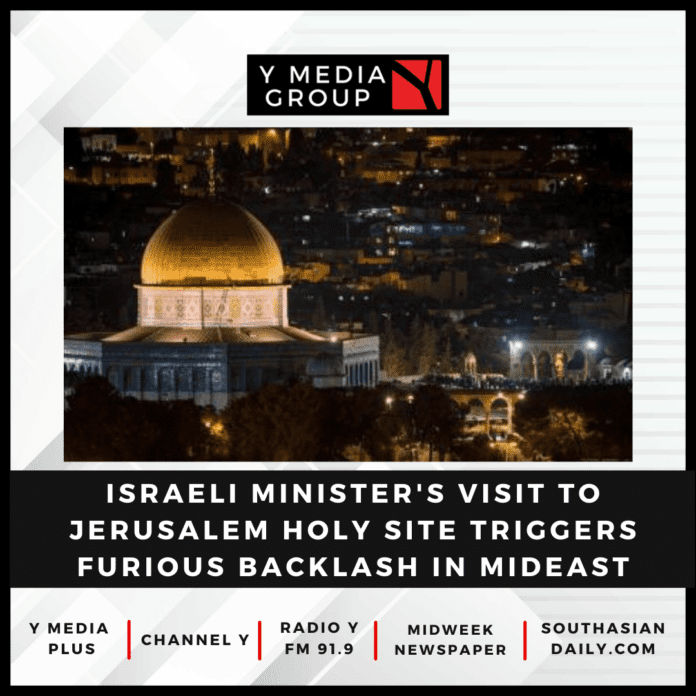 Israeli National Security Minister Itamar Ben-Gvir made a ‘controversial’ visit to the flashpoint holy site of Al-Aqsa Mosque compound in East Jerusalem, triggering a furious backlash from the Muslim world in the Middle East.

Nabil Abu Rudeineh, the spokesman of the Palestinian presidency, slammed Ben-Gvir’s visit to Al-Aqsa on Tuesday, the first by an Israeli minister in nearly five years, as “a challenge to the Palestinian people, the Arab nation, and the international community”, Xinhua news agency reported.

“The Israeli authorities’ attempts to change the existing historical and legal reality in Al-Aqsa by perpetuating its temporal division by dividing it spatially are rejected and doomed to failure,” he said, warning that Jerusalem and its holy sites are “a red line that cannot be crossed”.

Palestinian Prime Minister Mohammed Ishtaye told the weekly cabinet of the Palestinian Authority that Ben-Gvir’s storming of the Al-Aqsa Mosque compound, the third holiest site in Islam, constitutes a “serious challenge to the feelings of the Palestinian people”.

Hazem Qassem, a spokesman of the Gaza Strip’s ruling faction Hamas, condemned in a statement the Israeli minister’s visit as “a continuation of the Zionist’s occupation aggression,” vowing that the Palestinian people “will continue defending their holy places and Al-Aqsa Mosque.”

“Storming of the Al-Aqsa Mosque by an Israeli minister and violating the mosque’s sacredness is a condemned and provocative action and represents a stark violation of international law, as well as of the historical and legal status quo in Jerusalem and its holy sites,” Jordan’s Foreign Ministry spokesman Sinan Majali said in a statement.

The Egyptian Foreign Ministry expressed its regret over Ben-Gvir’s visit to the Al-Aqsa compound, stressing its total rejection of “any unilateral measures that violate the legal and historical status quo in Jerusalem”.

In Lebanon, the foreign ministry condemned Ben-Gvir’s visit as a “serious violation of the sanctity of Al-Aqsa Mosque”, which “indicates the direction of the extremist policies the Israeli government has adopted toward the Palestinian people and their rights and sanctities”.

Voices of strong condemnation were also heard from the Gulf states against the new Israeli minister’s visit to the holy site in Jerusalem.

The United Arab Emirates (UAE) also strongly condemned Ben-Gvir’s “storming of Al-Aqsa Mosque,” urging Israel to “halt serious and provocative violations” at the holy site, said the UAE foreign ministry in a statement. The UAE signed a normalization deal with Israel in 2020.

Qatar and Oman both denounced the far-right Israeli minister’s visit as a violation of international laws and all Muslims, according to separate statements issued by the foreign ministries of the two Gulf countries.

Meanwhile, the Iranian Foreign Ministry blasted Ben-Gvir’s visit to the Al-Aqsa Mosque compound as “sacrilege” of the holy site and a violation of international law.

Such “sacrilegious acts” amount to an affront to the values and sanctities of the world’s Muslims, the ministry’s spokesman Nasser Kanaani said in a statement published on the ministry’s website, warning against the “adventurist and provocative” actions of the new hardline Israeli government.

Turkey, which restored its full diplomatic ties with Israel in 2022 after years of tensions, also denounced Ben-Gvir’s “provocative visit”, said the Turkish Foreign Ministry. It urged Israel to “act responsibly to prevent such provocations that will violate the status and sanctity of holy places in Jerusalem and escalate the tension in the region”.

Responding to the outcry, Israeli Prime Minister Benjamin Netanyahu, the longest-serving Israeli leader that just returned to power after winning the November parliamentary election last year, affirmed in a statement issued by his office his commitment to “strictly maintaining the status quo” at the Al-Aqsa compound, adding that visits by ministers to the site are not considered “a change in the status quo”.

The Al-Aqsa Mosque compound, known to Jews as the most sacred site, is regarded by Muslims as their third holiest site.

The holy site has been administered by the Jerusalem Islamic Waqf, a Jordanian body, since 1948. Under a 1967 agreement between Israel and Jordan, non-Muslim worshippers can visit the compound but are prohibited from praying there.