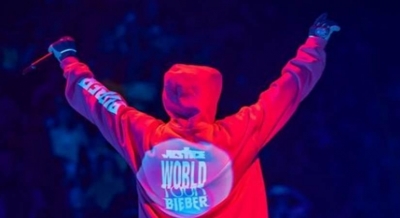 The most anticipated show of 2022 has returned as pop icon Justin Bieber announced he will resume his international ‘Justice World Tour.’

Bieber will resume his Justice World Tour on July 31st at the Lucca Summer Festival in Italy, kicking off his European festival run. He will then continue on his international world tour, performing in India and Asia, South America, South Africa, The Middle East, Australia, and New Zealand before returning to Europe in 2023.

The long-awaited tour is set to begin on October 18th, 2022, at the iconic Jawaharlal Nehru Stadium in New Delhi, India (JLN Stadium).

Tickets for Justin Bieber’s Justice World Tour – India are now on sale, at to BookMyShow and AEG Presents Asia. Tickets start at Rs 4,000/- and go up from there. A limited number of exclusive VIP Packages are also available and offers include an amazing selection of reserved seated tickets, custom merchandise and much more.

The Justice World Tour, which has already sold over 1.3 million tickets, will visit over 30 countries and perform over 125 shows from May 2022 to March 2023. Justin recently collaborated with director Cole Bennett on his new single and video ‘Honest,’ which features Don Toliver. ‘Honest’ is Justin’s first official single. ‘Ghost,’ the anthemic finale to the multi-platinum, Grammy-nominated Justice, went #1 at pop radio in January, giving him the most #1 hits by a male solo artist in US radio history and making him the only fifth artist to reach twenty Top 5 hits on the Hot 100.

The Justice World Tour, promoted by AEG Presents worldwide and BookMyShow in India, is Justin’s first global outing since the ‘Purpose World Tour’ in 2016-2017. The Times of London described Bieber’s 2016-2017 tour as “mesmerising,” with 2.7 million fans in attendance, including 65,000 at London’s British Summer Time Hyde Park festival.