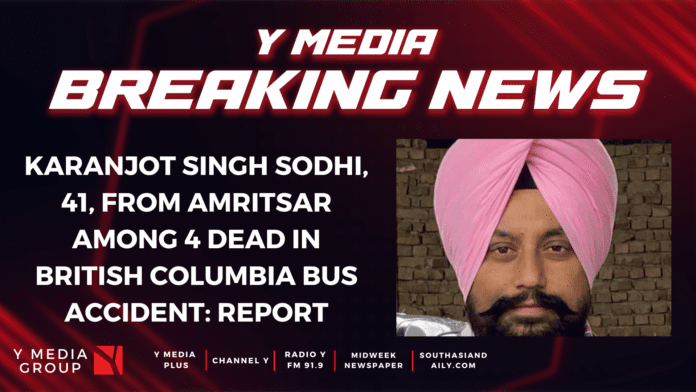 A Sikh man from Amritsar was among four killed and scores injured when a bus they were travelling on rolled over on an icy highway in British Columbia on Christmas eve, a local mediaperson reported.

Even as Canadian authorities are yet to confirm the identities of the deceased, editor of a Punjabi newspaper in Surrey, said Karanjot Singh Sodhi, 41, from Butala, Amritsar, was among those killed in the mishap.

“One of the four people killed in a bus accident on December 24 on the Vancouver-Kelowna route included Karanjot Singh Sodhi, 41,” Gurpreet S Sahota, editor of Surrey-based Akal Guardian newspaper, wrote on his Twitter handle.

“He was from Butala (Amritsar) and had only recently entered Canada on a work permit in September 2022,” Sahota said.

Sahota said that Sodhi was employed as a chef in a restaurant of an Okanagan winery.

“He left his wife, a son, and a daughter behind in his Punjab village. He was travelling by bus since he believed it was secure,” Sahota wrote in a series of tweets.

The bus crashed around 6 p.m. on Highway 97C east of Merritt, about 170 miles northeast of Vancouver.According to health officials, eight people were still in hospital on Christmas day, and two of them were reported to be in a serious condition.

The British Columbia Royal Canadian Mounted Police said in a statement that “extremely icy” road conditions along the highway caused the bus rollover.

However, they added that a probe into the exact cause of the accident has been launched and that the bus driver is assisting the police.

“Our hearts go out to everyone impacted by the accident on Hwy 97C last night, especially the loved ones of the four people who tragically died,” Health Minister Adrian Dix wrote on Twitter.

“Shocked and saddened by the news of a serious bus accident between Merritt and Kelowna on the Okanagan Connector. Our thoughts are with those impacted, their loved ones, and the first responders and healthcare workers giving their all to treat people and keep them safe,” Premier of British Columbia, David Eby, tweeted.