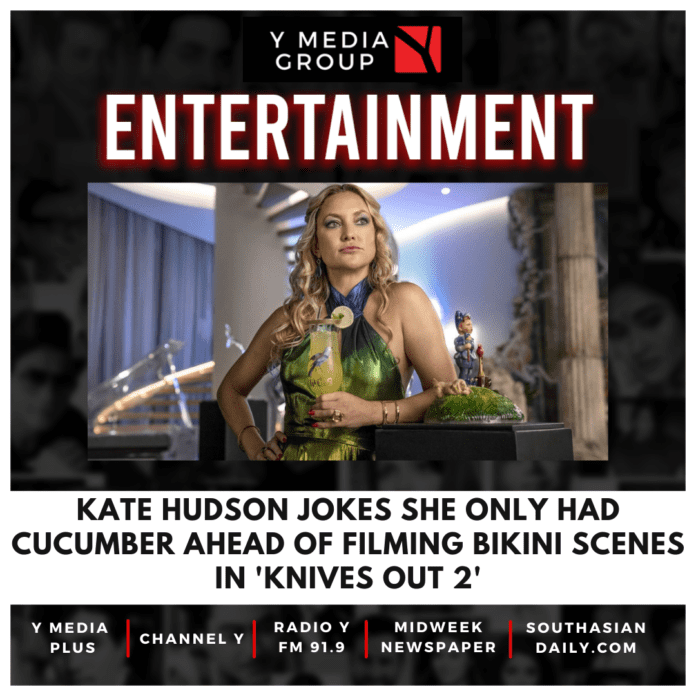 Actress Kate Hudson joked that she stuck to a diet of cucumbers while filming her bikini scenes in ‘Glass Onion: A Knives Out Mystery’.

Hudson made the gag on ITV’s ‘This Morning’ show on Wednesday, while discussing her poolside scene where she wears an orange two-piece. She said about abstaining from booze being drunk by other cast members to keep her figure, “When everybody was having aperol spritz, I was waiting for that scene to be shot. So, I was like, ‘I’ll just have that cucumber’,” reports aceshowbiz.com.

Hudson added about getting involved in the film, which also stars Daniel Craig as detective Benoit Blanc: “When we found out they were doing a second one (‘Knives Out’), I was like gonna barrel (director) Rian Johnson’s door down. I was like, ‘I want in.’ We were really locked down together because of COVID.”

“It was right at the peak of Delta (the COVID variant) so we couldn’t go anywhere. We’d rent out a bar, do murder mysteries and then have parties. That’s how we kept entertained.”

Hudson, who plays Birdie Jay in the ‘Knives Out’ sequel, previously told ‘Today’ about the cast enjoying wild parties during filming due to lockdown, “We had so much fun. It was at the height of Delta and we were in Belgrade, Serbia so the producer was like, ‘You are not leaving this hotel.'”

“Which is kind of like as nightmare in itself but they would rent the bar upstairs and we would just, you know, the circus got up there and we just started drinking. And when the circus starts drinking, things get weird and we had a blast.”