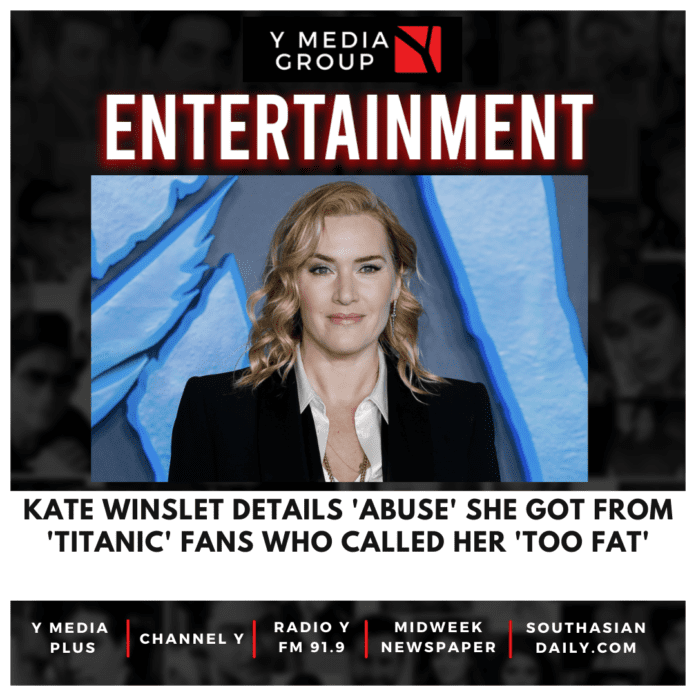 The actress, 47, slammed the “bullying” she received from some viewers who said she was “too fat” while she battled feeling “deeply insecure”, reports mirror.co.uk.

Winslet starred alongside Leonardo DiCaprio in James Cameron’s 1997 movie based on and named after RMS Titanic, the cruise ship which tragically sunk after hitting an iceberg in 1912.

In one of the final scenes, she and Leo’s character Jack are seen in the water as her character Rose climbs onto floating debris after the boat sank.

Speaking of the comments made from movie buffs about that pivotal scene in a recent episode of the Happy Sad Confused podcast, she said: “Apparently I was too fat.”

She explained how she wishes she had replied to the horrible comments at the time, adding: “I would have responded. I would have said, ‘Don’t you dare treat me like this. I’m a young woman, my body is changing, I’m figuring it out, I’m deeply insecure, I’m terrified, don’t make this any harder than it already is’.

“‘That’s bullying, you know, and actually borderline abusive’, I would say.”

Winslet has openly discussed body shaming in the past as she revealed she was cruelly told to settle for “fat girl” roles during her time at acting school.

She said: “It can be extremely negative. People are subject to scrutiny that is more than a young, vulnerable person can cope with. But, in the film industry, it is really changing. When I was younger my agent would get calls saying, ‘How’s her weight?’ I kid you not. So it’s heartwarming that this has started to change.”

Her comments come after it was emerged that her co-star Leonardo narrowly avoided losing his iconic role in Titanic after a row on-set with the film’s director James Cameron.

Cameron detailed threatening to send the then 20-something actor packing after he refused to take part in a vital part of production.

He had instructed DiCaprio to take part in a chemistry screen test alongside Winslet.

“He didn’t know he was going to test,” Cameron said.

“He came in, he thought it was another meeting to meet Kate.”

“And I said, ‘Well,’ and I shook his hand and I said, ‘Thanks for coming by’.” Leo reportedly responded: “Wait, wait, wait. You mean if I don’t read, I don’t get the part, just like that?