Kiara Advani reveals much more than relationship, thanks to Shahid Kapoor 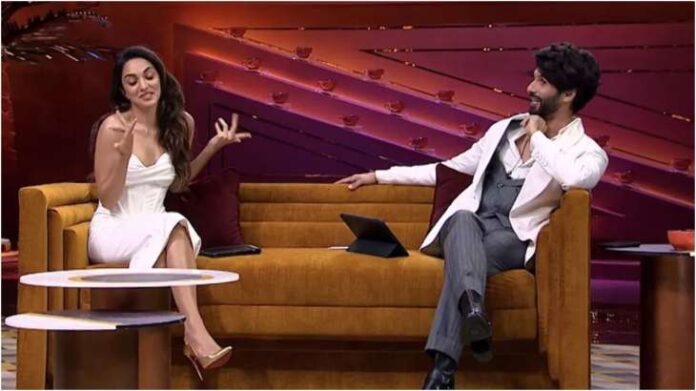 When Kiara Advani was announced to be joining Karan Johar with Shahid Kapoor, there was a bit of disappointment in the air. After all, the audience expected to see B-town’s fresh pair — Kiara Advani and Sidharth Malhotra. But KJo had different things in his mind. Ditching the obvious, he made the actors spill the obvious albeit by calling them on different episodes. As Kabir Singh co-stars united on the Koffee couch, they instantly mesmerised with their camaraderie. They discussed films, box office numbers, them as actors and of course, Kiara’s speculated relationship. There was also a moment of catharsis when Kiara confessed she finds a dependable friend in Shahid.

Kiara and Sidharth dating or not?

It was deja vu of sorts when Karan asked Kiara about her and Sidharth’s relationship status. Just like Sid, Kiara tried to brush the subject under carpet, and just like Vicky Kaushal, Shahid couldn’t hide his grin. Karan, on the other hand, held a victory smirk on his face. “Hiding your relationship is so in the past now,” said Karan making Kiara admit that she and her Shershaah co-actor are more than friends. However, she neither denied nor accepted being in a relationship with him.

Shahid got candid about his life on Koffee With Karan. The actor shared that Mira was only 20 when they got married, while he was 34. He said that she’s bright stability to his life and he’s glad that she could understand the two sides of him. One, where he’s influenced by the glitz and glamour of being an actor and second when he’s at home. Shahid said off camera, he’s a homely and spiritual person and is glad Mira comprehends both versions of him. Adding more it, Kiara shared that on one occasion, the actor had told her how he feels lucky to go home to Mira and his two beautiful children.

Kiara revealed that it was not on the sets of their film ‘Shershah’ that they met for the first time. She informed me that they had met much before they started doing the film together, after the wrap-up party of her Netflix project ‘Lust Stories’. And there’s more to it – Karan Johar was also there! Kiara said, “Sid and I know each other from before we were cast in Shershaah.” Karan then intervened and said, “Yes, much before”, to which Kiara replied and said, “Yes at the wrap party of Lust Stories which we crashed.”

Karan then narrated their first meeting and said, “We crashed a friend’s house and the cast of Lust Stories as we had and Sid also came to the party and that’s where you (Kiara) and Sid met for the first time.” Shahid then said that it’s a good thing to remember your first meeting and Kiara smiled and replied, “Of course, I will never forget.”

During the show, Karan poked a question about marriage, Kiara took the conversation further, revealing that she believes in the institution of marriage. “I have seen beautiful marriages around me, and I see that happen in my life too. But I will not reveal when that is happening,” she said.

Considering the news is almost confirmed, Karan and Shahid say they would dance together to the song ‘Dola re Dola’ whenever the wedding happens and confirm their invitation.

One fun bit from Kiara’s rapid-fire, however, has been one of the highlights of the fun episode. In the rapid-fire round, Karan asked Kiara which celebrity would she love to have in her bride squad, and Kiara, very fondly answered, “Alia Bhatt”. Kiara said, “I’d really love Alia Bhatt to be in my bride squad. I love her, she is so cute.” Karan then got confused, and said, “In your bride squad? Marrying Sidharth Malhotra?” He then said, “Marrying Sidharth Malhotra with Alia Bhatt in the bride’s quad is quite cool”. Shahid also added, “Maybe…it might just be cool”.

Apparently, Alia and Sidharth dated for a while after they were paired together in their debut film Student of the Year.