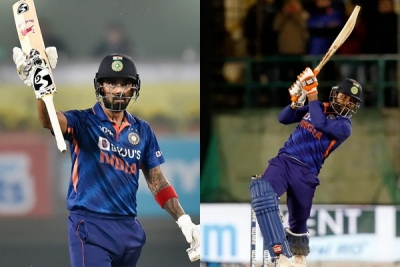 Rahul, who is currently undergoing rehab at the National Cricket Academy (NCA), is now likely to miss the T20I series, which is scheduled to be played across three venues — Trinidad, St Kitts and Florida (US) — from July 29 to August 7.

The 30-year-old recently had groin surgery in Germany. After the successful completion of operation, he has gone back to the NCA and has been posting pictures on his social media account about his rehab programme. He had also addressed the candidates, who attended the Level-3 coach certification course at NCA.

According to a Cricbuzz report, Rahul, along with Kuldeep Yadav who too was conditionally selected – subject to attaining full fitness, were to appear for a test at the NCA on Friday. It looks Rahul may now not only miss the fitness test but the tour itself.

Meanwhile, all-rounder Ravindra Jadeja is also a doubtful starter for the ODI series against West Indies starting on Friday. It has been learnt that Jadeja, named vice-captain for the three-match ODI series, has a niggle on his knee and the medical advice being sought to determine the extent of seriousness of his injury.

It is understood that the 33-year old could be rested for the entire ODI series as a precaution to not aggravate his injury, supposedly on his left knee.The allrounder could be fit for the five-match T20I series that follow the three ODIs. The ODIs, all to be played at the Queen’s Park Oval in Port of Spain, Trinidad, are scheduled for July 22, 24 and 27.

The development has led the national selectors and the team management into thinking whether they have to name a deputy. There is a chance that there may not be an announcement and the decision on the vice-captaincy could be left to coach Rahul Dravid to decide on the spot. The other seniors in the ODI squad are Shardul Thakur and Yuzvendra Chahal.