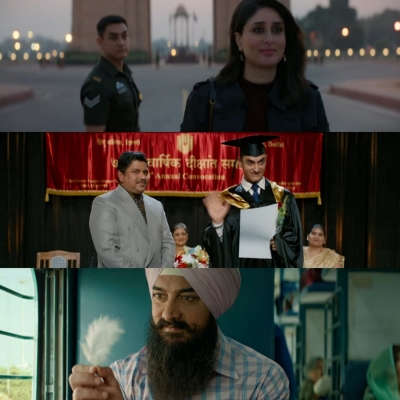 The trailer of Aamir Khan and Kareena Kapoor Khans upcoming movie ‘Laal Singh Chaddha’ was released on Sunday during the second strategic timeout of the IPL finale’s first innings.

The trailer showcases Aamir playing the titular character of a slow-witted person with a childlike optimism.

The film, which also stars Mona Singh and Chaitanya Akkineni, has been shot at multiple picturesque locations across India. With the film, Aamir and Kareena have reunited on-screen 13 years after the 2009 hit film ‘3 Idiots’.

The film, in the making for 14 years, has been officially adapted for the Indian audience from the 1994 Tom Hanks-starrer ‘Forrest Gump’, and features the original screenplay by Eric Roth adapted by ‘Delhi 6’ actor Atul Kulkarni.