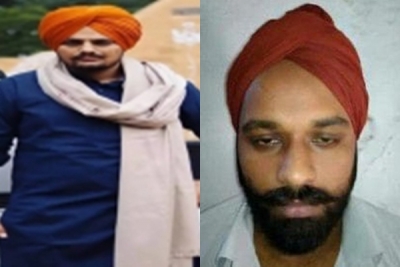 Manpreet Singh, the first arrest in the killing of famed singer-turned-politician Sidhu Moosewala was produced before a Mansa court in Punjab on Tuesday and was sent to police custody for five days.

A team of Punjab Police along with sleuths of the Uttarakhand STF had arrested Manpreet Singh from Dehradun on Monday. He was suspected to have provided “key logistical support” in the murder of the Punjabi singer.

Singh, a resident of Faridkot in Punjab, was reportedly trying to hide among pilgrims, who were scheduled to go on a yatra to Hemkund in Chamoli district when the police nabbed him.

Meanwhile, the cremation of Moosewala was held in his native village Moosa in Mansa district on Tuesday.

After much delay to get the consent of his father, the postmortem of Moosewala was conducted by a five-member forensic team of doctors from Patiala and Faridkot medical colleges at the Civil Hospital in Mansa.

Tens of thousands of Moosewala’s fans and followers gathered outside his palatial bungalow to pay tributes and attended his funeral.

Officials told IANS the singer-turned-politician’s wailing parents gave consent for the postmortem of their only child after Chief Minister Bhagwant Mann announced to set up a judicial commission under a sitting judge of Punjab and Haryana High Court to probe his killing.

Moosewala, whose real name was Shubhdeep Singh Sidhu, 29, was shot dead while driving his vehicle in Mansa district on Sunday, a day after his security cover was withdrawn.