Markets, Restaurants To Close Early In Pakistan To Save Energy: Defence Minister 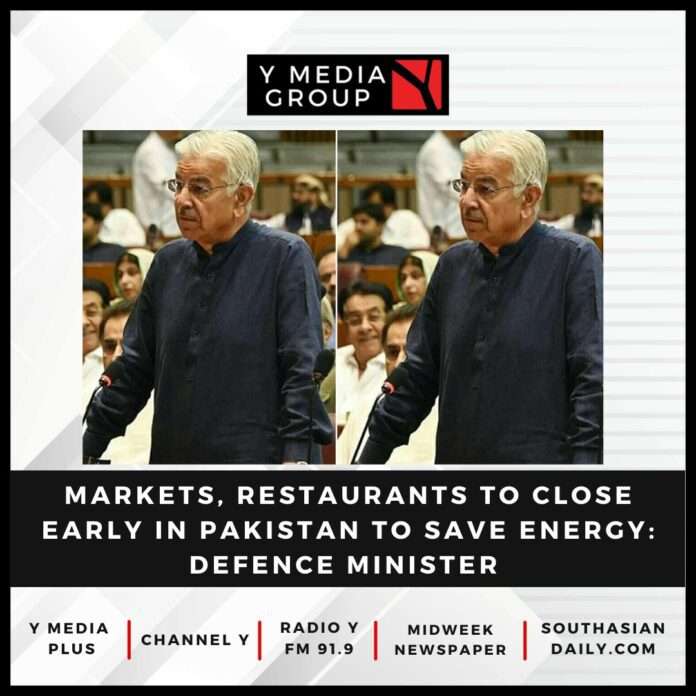 Pakistan’s Defence Minister Khawaja Asif said on Tuesday that the government would approach the provinces for the implementation of a policy aimed at saving energy, local media reported.

Briefing the media after a meeting of the federal cabinet, Asif that Prime Minister Shehbaz Sharif had held several meetings on the issue and a final decision would be taken by Thursday, Dawn reported.

He said that estimates have shown that if 20 per cent of the government workforce worked from home on a rotation basis, Pak Rs 56 billion could be saved.

“It is mainly about the nation limiting its lifestyle,” he said.

Asif added that the timing of wedding halls would be restricted to 10 pm, while restaurants, hotels and markets would close down by 8 pm in order to save energy.

He, however, said that there may be some room for the closing time for restaurants to be extended by an hour, Dawn reported.

The minister said that by implementing these steps, the country would be able to save Rs 62 billion.

Asif also said that the government is slowly working on shifting to renewable energy, but until that is achieved, such measures are important.

He went on to say that energy-efficient fans and bulbs would soon be introduced in the markets, which would further help save Rs 38 billion.

“Similarly, if street lights are used alternatively, we would be able to save Rs 4 billion.”

The minister revealed that the government is also in talks with motorcycle companies for electric bikes.

“The motorcycles that run on petrol will slowly be phased out. We have begun importing e-bikes and have started negotiations with motorcycle companies for modification of the existing motorcycles. This will save us around Rs 86 billion,” he added, Dawn reported.

If all these measures are translated, Asif said, “You will see that a lot of money can be saved.”