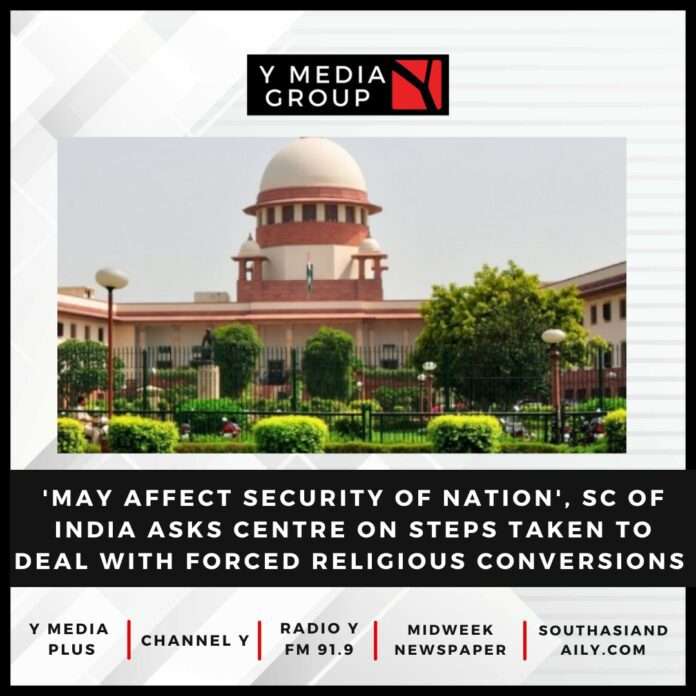 The Supreme Court on Monday said the issue of forced religious conversion is “very serious” and may affect the security of the nation and as well as freedom of citizens and asked the Centre to make its stand clear on what steps can be taken to curb forced conversions.

The top court said there is freedom of religion, but no freedom on forced conversion.

A bench headed by Justice M.R. Shah and comprising Justice Hima Kohli was hearing a petition filed by advocate Ashwini Upadhyay against fraudulent religious conversion and religious conversion by intimidation, threatening, deceivingly luring through gifts and monetary benefits, as it offends Articles 14, 21, and 25.

Justice Shah told Solicitor General Tushar Mehta, representing the Centre, this is such a serious matter and Mr Mehta, where is your stand by way of counter? Very serious and sincere efforts are to be made.

Mehta submitted that there were two acts by MP and Orissa on forcible religious conversion and pointed out that people are lured by giving rice and wheat, which is a ground for conversion. “It is rampant in tribal areas”, said Mehta, adding that he will file a reply by Monday.

Justice Shah said there may be a freedom of religion, but no freedom on forced conversion and asked Mehta, what steps have been taken by the Centre, “otherwise very difficult… Make your stand very clear, what action you propose to take.” The bench told Mehta that Centre must step in to stop such forceful conversion before the situation becomes difficult and asked the government to make its stand clear on forced religious conversions.

The top court said the issue with alleged conversion of religion, if it is found to be true, affects the security of the nation as well as the freedom of citizen, therefore it is better that Union of India make its stand clear and file a counter on what steps can be taken to curb forced conversions by force, allurement or fraudulent means. After hearing arguments, the bench scheduled the matter for further hearing on November 28 and asked the Centre to file its response before November 22.

On September 23, the Supreme Court issued notice on a plea against fraudulent religious conversion and religious conversion by intimidation, threatening, deceivingly luring through gifts and monetary benefits, as it offends Articles 14, 21, and 25. The plea claimed that if such conversions were not checked, Hindus would soon become a minority in India.

In the previous hearing, Upadhyay had told the apex court that women and children are the main target of foreign funded missionaries and conversion mafias, but Centre and state governments have not taken appropriate steps to control religious conversion in spirit of Article 15(3).

The plea said, “freedom of religion enshrined in Article 25 is not granted exclusively in respect of one faith, but includes all religions equally, and an individual may properly enjoy it if he practices his right in a manner commensurate with the freedom of persons practicing the other religions. What is liberty for one, in equal measure, is freedom for the other, and therefore, there can be no such thing as a fundamental right to turn another man into one’s own religion”.

The petitioner has made the Ministry of Home Affairs, Ministry of Law and Justice, CBI, NIA and state governments as respondents in the matter.

The plea contended that Church planting is a process that results in a new (local) church being established and several unethical predatory conversion strategies are commonly used. It added that one method is material enticement in which humanitarian aid or economic, educational, medical or social assistance is offered on the condition that the person converts. “Another is the denigration of the person’s religion to make a new religion appear superior. A third unethical, predatory method is the promotion of ‘bigotry’ i.e. knowingly and intentionally promoting religious hatred & violence. Predatory proselytization tears apart the fabric of the communities where it occurs and has led to the annihilation of culture”, added the plea.

Upadhyay said the situation is alarming as many individuals-organizations are carrying mass conversion of socially economically underprivileged citizens, particularly belonging to scheduled castes and scheduled tribes by use of force, allurement and fraudulent means like black magic, superstition, healing etc.