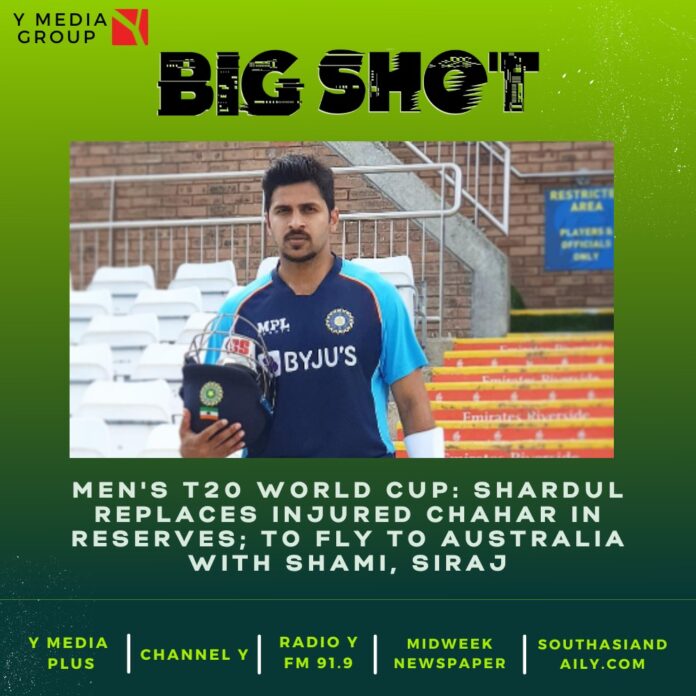 All-rounder Shardul Thakur has replaced injured Deepak Chahar as a reserve player in the India squad for the ICC Men’s T20 World Cup in Australia beginning on October 16.

The 30-year-old Chahar was named as part of the reserves for the T20 World Cup along with Shami, Shreyas Iyer and Ravi Bishnoi. But with pace spearhead Jasprit Bumrah ruled out due to a stress fracture in the back, the CSK pacer was tipped to replace him in the 15-member squad.

However, with Chahar too ruled out for the showpiece event, the BCCI has decided to send Siraj and Shardul as well along with Shami to Australia.

The report further said the team management will make a final assessment of their form in Australia before naming a replacement for the injured Jasprit Bumrah in the 15-man squad. Bumrah was ruled out of the competition because of a stress fracture in the back.

Shami is being tipped to replace Bumrah in the squad but with the 32-year-old returning to the side following a prolonged bout of Covid-19 and having hardly played T20I cricket since the 2021 T20 World Cup in the UAE could go against him, though he did exceptionally well during the Test series in Australia, which India won 2-1 to clinch the Border-Gavaskar Trophy.

His prolonged Covid-19 forced him out of the limited-overs series against Australia and South Africa and he hasn’t also played any T20I for India since the last T20 World Cup.

On the other hand, Siraj’s impressive form in the recently-concluded ODI series against South Africa, which India won 2-1, might push him in the 15-member squad. He claimed two wickets in the series-deciding third match in New Delhi on Tuesday as the host won the match by seven wickets. He was named ‘Player of the Series’ in the three-match ODI fixture with five wickets.

Chahar was in sublime form ever since he returned from a long injury lay-off during the series against Zimbabwe in Harare after missing the entire Indian Premier League 2022 season. But the bowler was recently ruled out of the ODI series against South Africa due to a stiff back with off-spinner Washington Sundar replacing him.

Shami, Siraj and Thakur will join the squad in Perth where they are currently preparing for the mega event.