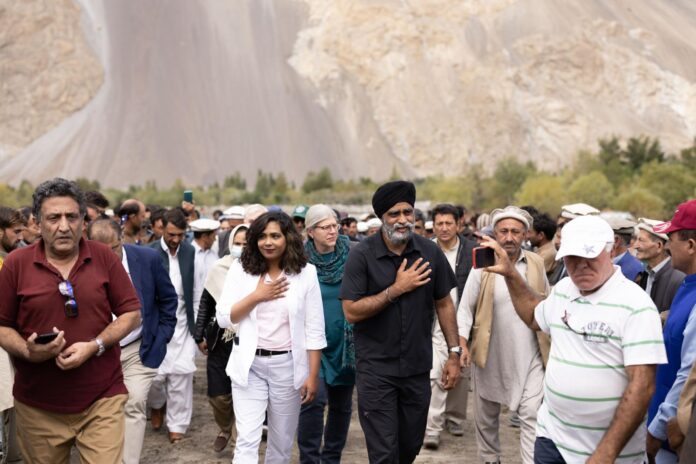 Pakistan is experiencing the worst climate catastrophe in its recent history. Heavy monsoon rains and flooding since mid-June have caused over 1,500 deaths and impacted 33 million lives across the country. Hundreds of thousands of homes have been destroyed, and livelihoods, crops, and livestock have been severely affected. There must be international support to save lives and rebuild communities in Pakistan.

Canada took action and sent a delegation comprised of the Minister for International Development, Harjit Sajjan, along with MPs Iqra Khalid, Salma Zahid and Shafqat Ali, to Pakistan to assess the dire situation firsthand.

The delegation travelled from Sindh to Khyber Pakhtoon Khan and met with impacted communities. They heard the heart-wrenching stories from families who have lost their homes, children who no longer have a school to attend, and healthcare workers who are preparing for the diseases that will become widespread as the country waits for the water to recede.

The delegation also met with government officials including Prime Minister Shahbaz Sharif and the National Disaster Management Authority, to receive briefings on the situation on the ground.

In light of this ongoing tragedy, Canada has stepped up to support the people of Pakistan. Prime Minister Trudeau announced that Canada is allocating an additional $25 million of funding, on top of the initial $5 million committed, in response to the ongoing crisis in Pakistan and to support development projects in
the country.

Prime Minister Justin Trudeau also announced that the Government of Canada is matching up to $3 million in donations made by individuals to the Humanitarian Coalition and its members in response to the flooding in Pakistan, until September 28th .

These funds will help to deliver life-saving support, such as emergency food and nutrition assistance, emergency cash and vouchers, as well as necessary water, sanitation and health services.

As emergency relief is provided to the over 6 million people in need, Canada is also looking at what redevelopment looks like for Pakistan and will be monitoring the evolving situation closely.

While in Pakistan, MP Iqra Khalid also met with the UNHCR and Inspire Pakistan and reviewed their efforts to support Afghan refugees in resettlement. She participated in the various services offered, including vocational training and trauma recovery. Canada provides $6 million to UNHCR to support these efforts.

MP Khalid also engaged with Islamic Relief and visited their ongoing projects in Rawalpindi, including women entrepreneurship and child protection. This visit showed firsthand how impactful Canadian support has been in changing lives of young Pakistanis for the better.

“The floods in Pakistan have devastated millions in the impacted communities. I am touched by the courage and resilience of the people of Pakistan as they continue to endure and overcome these challenges. The international community must continue to step up to help rebuild and ensure that a prosperous future for Pakistani youth becomes a reality,” MP Khalid said.

MP Khalid then proceeded to meet with civil organizations, including the Punjab Law Council and the Lahore Chamber of Commerce. She heard directly about solutions to better support victims of the floods, as well as building stronger people-to-people ties between Pakistan and Canada.