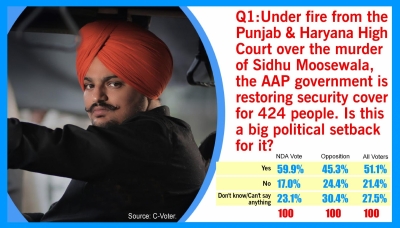 The Aam Aadmi Party (AAP) government in Punjab led by Chief Minister Bhagwant Mann has announced that it is restoring security cover for 424 people, about 10 days after it was publicly withdrawn with much fanfare. Within days of the withdrawal of the security cover, famous singer and Congress supporter Sidhu Moosewala was brutally gunned down and riddled with bullets not far from his home in Mansa district.

This murder in broad daylight not only triggered public outrage and anger, it also prompted the Punjab and Haryana High court to take sumo motto notice and demand answers from the AAP government.

The court wanted to know on what basis the state government had suddenly withdrawn security cover from more than 400 people, many of whom were vulnerable and on the radar of gangsters and terrorists.

The news that security for Moosewala was removed was allegedly shared by social media handles of AAP supporters.

CVoter conducted a survey on behalf of IANS to gauge public opinion o the issue and find out if the restoration of security made a difference in perceptions about the AAP government.

The responses given by ordinary citizens across the country is not good news for AAP. Expectedly, 60 per cent of NDA supporters said this move was a big political setback for the AAP government, while 23 per cent stated they had no opinion on the issue.

Overall, a little more than 51 per cent of the respondents said this was a big political setback for AAP, while almost 28 per cent had no opinion.

More concerning for AAP was the fact that more than 45 per cent of opposition supporters stated this was a big political setback for the Punjab government.

AAP had stormed into power during assembly elections in March 2022 with a massive mandate to rule the state.