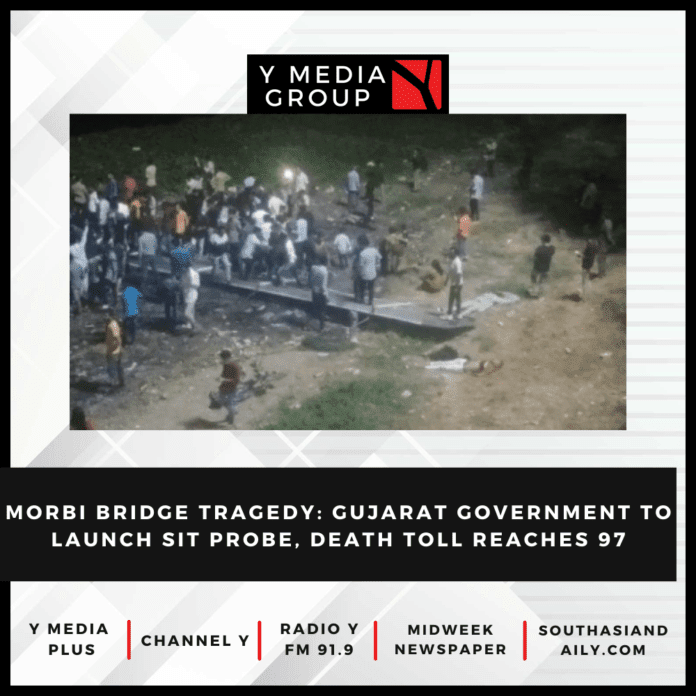 The Gujarat government has constituted a Special Investigation Team (SIT) to inquire into the suspension bridge collapse in Gujarat’s Morbi town in which 97 persons have been killed till now. Rescue operation is underway in the Machhu river and the death toll is likely to increase further, officials said.

Government hospital doctors have told local media that the bodies of 45 children have been recovered till now which is nearly 70 per cent of the total death toll. The Morbi Government hospital has released the list of 47 deceased persons.

Municipalities Commissioner Rajkumar Beniwal is going to head the probe panel. Before leaving for Morbi, he told the local media, “All team members will reach the tragedy site on Sunday and start the investigation. The team’s first task is to find out the reason behind the collapse of the suspension bridge, and based on the findings SIT will also make suggestions to avoid such incidents in future.”

He said there are four technical experts which are part of the team, who are good at structural design and quality control, and will collect samples of the bridge as well as its quality will be checked, whether proper standard was maintained or not.

Beniwal added that the contractor engineer’s statement will be recorded and documents of various certificates will be recovered to know whether at every stage, quality approvals were taken and materials were sent for testing or not.

Even a bridge designer’s certificate will be sought whether it was approved by any government agency or not, he said.