More than two in five Canadians report being most affected by rising food prices: StatsCan 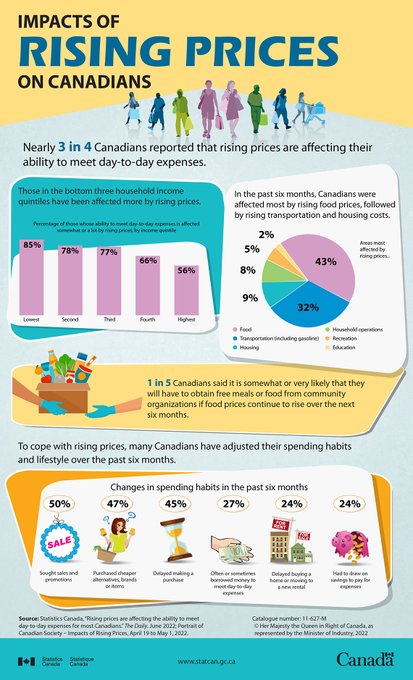 Over the past year, consumer inflation has steadily increased, reaching a year-over-year increase of 6.8% in April 2022. Heightened consumer demand and challenges to the supply chain are some of the main factors contributing to higher prices.

To understand how rising prices are contributing to financial concerns or influencing the financial decisions of Canadians, Statistics Canada conducted the Portrait of Canadian Society survey from April 19 to May 1, 2022.

It found that nearly three in four Canadians reported that rising prices are affecting their ability to meet day-to-day expenses such as transportation, housing, food, and clothing. As a result, many Canadians are adjusting their behaviour to adapt to this new reality, including adjusting their spending habits and delaying the purchase of a home or moving to a new rental.

Regionally, there was little variation between provinces—most Canadians are feeling the impacts of inflation. Those in lower income quintiles, however, are more concerned about and affected by rising prices.

When asked in which area they were most affected by rising prices during the six months preceding the survey, 43% of Canadians answered food. After food, the most affected areas were transportation (32%), shelter (9%) and household operations (8%).

As a result of rising prices, 20% of Canadians reported that their households are very (7%) or somewhat (13%) likely to obtain food or meals from community organizations, such as food banks, community centres, faith-based organizations, school programs or community gardens, over the next six months. A recent study estimated that fewer than 2% of households used a food bank during a three-month period in the early months of the pandemic. However, the latest statistics from Food Banks Canada indicate that the need for and use of food banks has been increasing since June 2020.

Households with at least one child under the age of 18 were almost three times as likely to say that they are very likely to obtain food or meals from a community organization, compared with households without children (13% vs. 5%).

Another major area of concern for many Canadians is housing costs. Around 56% of Canadians are very (30%) or somewhat (26%) concerned about whether they can afford housing or rent. Shelter prices, including rented accommodation, owned accommodation and water, fuel and electricity, rose 7.4% year over year in April 2022, the largest increase since 1983.

Differences between age groups were particularly significant. Younger Canadians aged 15 to 29 (53%) and 30 to 39 (39%) were more than twice as likely as those 40 and above (20%) to report being very concerned about their ability to afford housing or rent. This could be because older Canadians are more likely to have already purchased and paid off their home.

These concerns have led to changes in behaviour among Canadian youth and younger adults. Over the six months preceding the survey, 39% of those aged 15 to 29 and 38% of those aged 30 to 39 said that they wanted to buy a home or move to a new rental but decided not to because of price concerns, compared with 24% of the overall population.

In order to deal with rising prices, half of Canadians said they have sought out sales and promotions in the six months preceding the survey. Meanwhile, 47% have found themselves purchasing cheaper alternatives, brands or items and 45% have delayed making a purchase in response to rising prices.

In addition to making changes to their spending habits, more than one-quarter of Canadians (27%) reported that they have had to borrow money from friends or relatives, take on additional debt or use credit to meet day-to-day expenses in the six months preceding the survey. Several groups were more likely to report borrowing money: those in the bottom two household income quintiles; younger individuals (aged 15 to 39); households with at least one child aged 17 or younger; persons with a disability; and individuals belonging to racialized groups.

Rising prices are also affecting Canadians’ ability to save. About 24% of Canadians said they have had to draw on their savings in order to pay their expenses. Another 29% said they were saving less, and 19% reported they are no longer able to save each month.

In the coming months, Statistics Canada will continue to monitor the impacts of rising prices on Canadians.

Chart 1
Proportion of Canadians whose ability to meet day-to-day expenses has been affected by a lot or somewhat, by income quintile