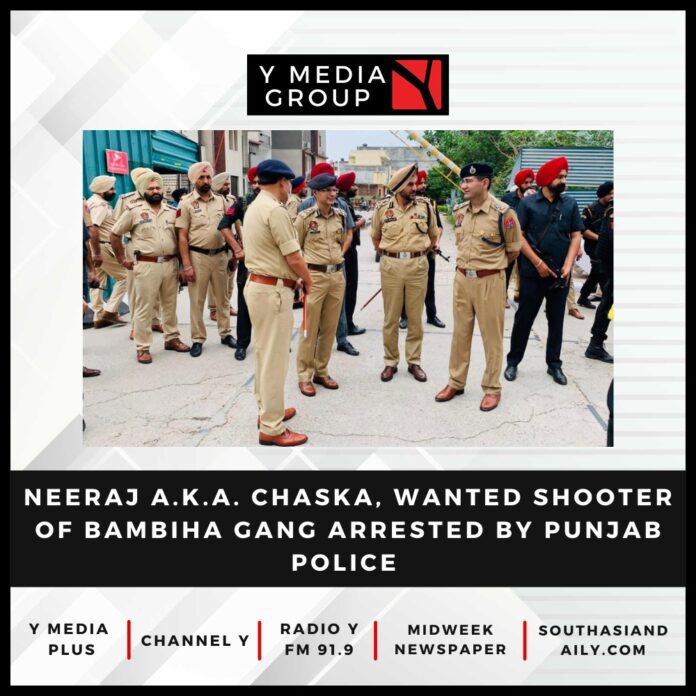 Punjab Police have arrested Neeraj a.k.a. Chaska, the top-most wanted shooter of the Davinder Bambiha gang, for his involvement in multiple murders, including the murder of student leader Gurlal Brar, Director General of Police Gaurav Yadav said here on Thursday.

The murder of Brar, who was a close relative of Canada-based gangster Goldy Brar, has triggered an inter-gang rivalry between the Davinder Bambiha gang and the Lawrence Bishnoi gang, leading to a spate of murders in Punjab, Haryana, Chandigarh and the National Capital Region (NCR) Delhi.

Brar was shot dead outside a nightclub in Chandigarh in October 2020.

Neeraj had been absconding since 2019.

DGP Yadav said in an ongoing intelligence-based operation, a team of the Anti-Gangster Task Force (AGTF) of Punjab Police, in coordination with central agencies has arrested Neeraj from Samba district in Jammu.

The police have also recovered two foreign-made pistols, besides 17 cartridges from his possession.

He said apart from Gurlal’s murder, Neeraj has been directly involved in at least four more murders, including the murder of kabbadi player Money, who was killed in Jaito town of Faridkot district on the directions of Amna Jaito lodged in Ferozepur Jail in August 2019, and double murder case in which Pardeep, alias Panja, and Rahul were killed in Ambala in March 2021.

The DGP said Neeraj along with his associates had also killed Surjit Bouncer in Chandigarh in March 2020, following which the Davinder Bambiha group took the responsibility of the murder on Facebook claiming that Surjit was killed to avenge the killing of another bouncer Amit Sharma.