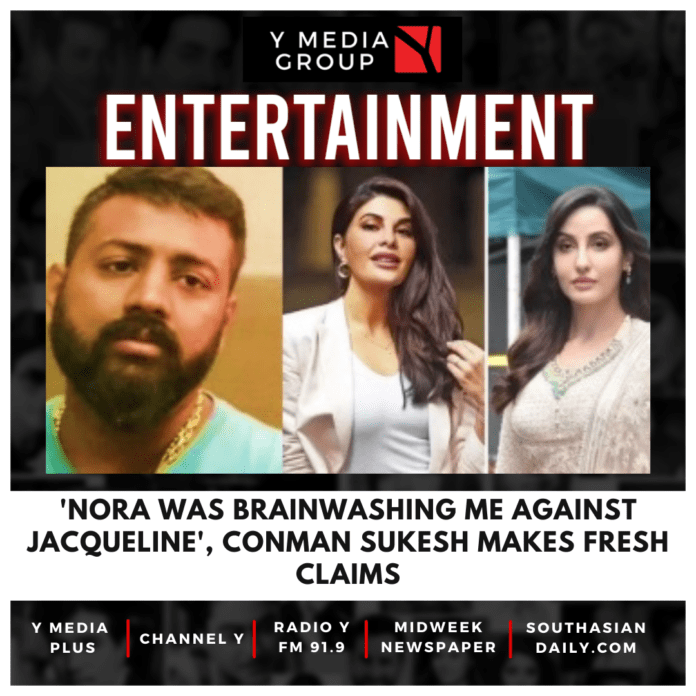 Bollywood actress Nora Fatehi’s entire statement taken by Delhi Police’s Economic Offences Wing (EOW) “is changed and new stories were made up by her, and the same can be very well be verified and compared with the charge sheet of Enforcement Directorate (ED)”, jailed conman Sukesh Chandrashekhar claimed in his latest letter.

The prime accused in a Rs 200 crore money laundering case, in his letter addressed to the media, said, “Nora was always jealous of Bollywood actor Jacqueline Fernandez, and was always brainwashing me against her as she wanted me to leave Jacqueline and date her.”

“… Nora used to try calling me atleast 10 times a day, and if I don’t answer her call she used to keep on calling me… Nora claims that she did not wanted a car, or she did not take it for herself is a very big lie, as she was after my life that her car had to be changed as the ‘CLA’ that she had looked very cheap. Then it was me and her who selected the (new) car,” reads the letter.

“The chats and screenshots are very well with the ED, so there is no lie at all, in fact I wanted to give her Range Rover, but as the car was not available in stock, I gave her the BMW S series, which she kept using for a long time,” Sukesh claimed.

“… as she was not an Indian resident, she asked me to register it (the car) on the name of her best friend’s husband Bobby. Me and Nora never had a professional transaction, as she is claiming, except for once that she attended an event hosted by my foundation, for which official payment was made to her agency,” he said in the letter which was shared through his lawyers.

Sukesh also claimed that he and Jacqueline were in a “serious relationship” and his association with Bollywood celebrities Nikki Tamboli and Chahatt Khanna was “only professional” as they were supposed to act in his production under LS film banner.

He said that the new statements made by them (actresses) before the EOW are “fabricated” and they only want to “save their skin and grab publicity”.