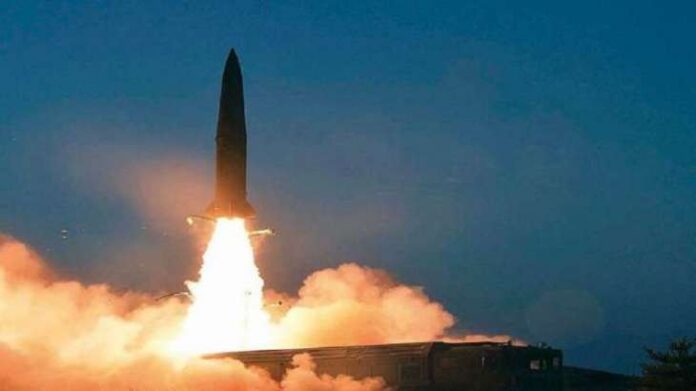 The South Korean military said North Korea fired a ballistic missile toward its eastern waters on Sunday, the latest in the country’s barrage of weapons tests in recent days. South Korea’s Joint Chiefs of Staff said in a statement the launch occurred early Sunday but gave no further details, including how far the weapon may have flown.

The Japanese government also said North Korea fired what was a possible ballistic missile. The Japanese coast guard said it has warned ships around the country’s coasts about falling objects and urged them to stay away. The launch, the North’s sixth round of weapons tests in two weeks, came hours after the United States and South Korea wrapped a new round of naval drills off the Korean Peninsula’s east coast. The drills involved a U.S. aircraft carrier.

North Korea’s military warned Saturday that the U.S. redeployment of the aircraft carrier near the Korean Peninsula is causing a “considerably huge negative splash” in regional security, as it defended its recent missile tests as a “righteous reaction” to intimidating military drills between its rivals.

The North Korean Defense Ministry statement came a day after the nuclear-powered aircraft carrier USS Ronald Reagan began naval drills with South Korean warships. The Reagan and its battle group returned to the area after North Korea fired a powerful missile over Japan earlier this week to protest the carrier group’s previous training with South Korea.