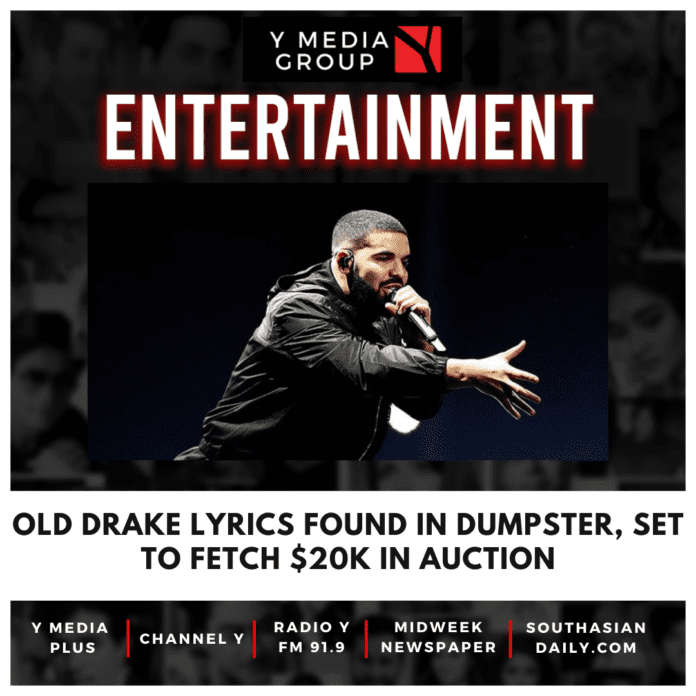 Rapper Drake is such a big artiste in music now that he is able to make money from remnants of his past.

One of the highest-paid rappers today, the 36-year-old star has left behind evidence of his hard work and genuine passion for hip-hop music as his old lyrics have surfaced and are set to make some serious money, reports aceshowbiz.com.

According to TMZ, abandoned lyrics from Drake’s teenage days were recently found in a dumpster outside his uncle’s furniture factory in Memphis. The lyrics are now being auctioned off at the starting price of $20,000 through Moments In Time.

A representative for the auction house says the Canadian superstar worked at the factory briefly when he was younger. The lyrics were found in the dumpster when the factory eventually closed down.

In photos of the sheets containing the lyrics allegedly written by Drake, he jotted down poetic lines like, “Plates/passed around for collection/ Raising money for cheap cell phones with no reception.”

The rough drafts also included lyrics for a track named “Come Spring”, which eventually evolved into “Come Winter” from his early mixtape “Room for Improvement”.

“We’re in the age of conflict and knowledge/But we’re trapped in this cage of barbed wire and wreckage with the freedom to go to college,” one of the pages read. “The freedom to indulge and dissolve ourselves in the process/The law says you have witness an audience in the race of silence. Take refuge in a response that defines the face of violence.”

The sheet also contains the phone number of someone named Sylvia, indicating that Drake had been popular with the ladies back then.

Drake has since come a long way from his days as an aspiring rapper. His most recent album “Her Loss”, a collaboration with 21 Savage, debuted at No. 1 on Billboard’s Hot 200 after it was released on November 4. The album marks the biggest opening week for a hip-hop/R&B album in 2022, selling 411,000 copies.

In the same month, he claimed another Billboard record, becoming the only artist ever to occupy at least eight of the top 10 songs in the Hot 100 chart simultaneously on two different occasions.