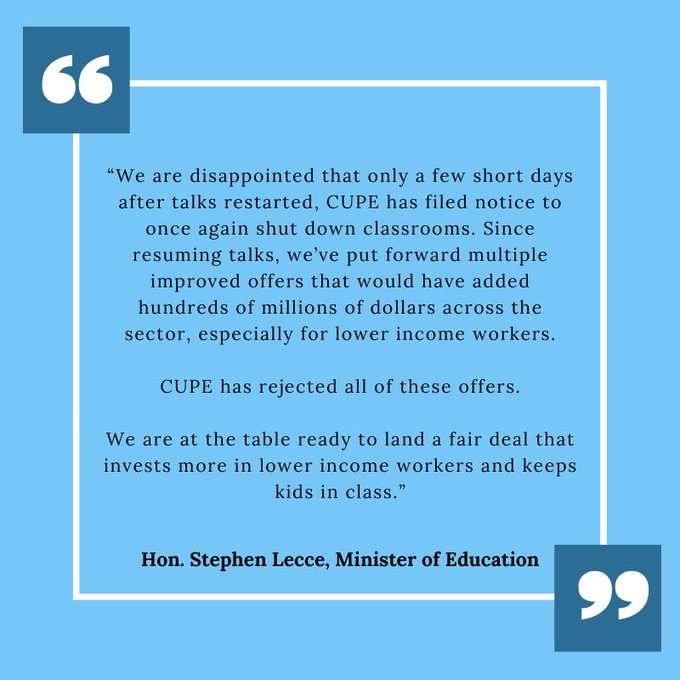 The Canadian Union of Public Employees (CUPE), the union representing 55,000 Ontario education workers has filed a five-day notice to go back on strike.

Making their stand clear, Laura Walton, president of CUPE’s Ontario School Board Council of Unions, said Wednesday at a news conference that this was ‘never just about wages’ and accused the Ford government of caring more for cars and highways than kids. She further added that although the $1 increase per hour is a win for workers, it is not enough and urged Ford Government to “come forward with a deal that truly helps students catch up”.

In response, Education Minister Stephen Lecce said the government is “very disappointed” by this move and asked “Why are we here? We offered $335 million more over four years.”

The union representing school support workers says that it is prepared to “spend all weekend” at the negotiation table in an attempt to stave off a planned strike that could once again shutter schools.

CUPE’s Ontario School Board Council of Unions has released a statement, confirming that it is committed to resuming talks with the Ministry of Education ahead of a planned strike on Monday.

The union said that its leadership, as well as the ministry, has agreed to set a deadline of 5 p.m. on Sunday to get a deal in order “to provide parents and caregivers as much notice as possible” about a possible interruption to in-person learning.

Meanwhile, Frontline health-care workers and staff in licensed childcare settings will be given access to free childcare for their elementary-aged children in the event of a strike by school support staff, Education Minister Stephen Lecce has announced.

“We remain on the side of all parents who just want to see their children in the classroom learning,” he said. “We’ll continue to be at the table to make that happen.”