Ontario NDP Will Remove Tolls For Truckers On Highway 407 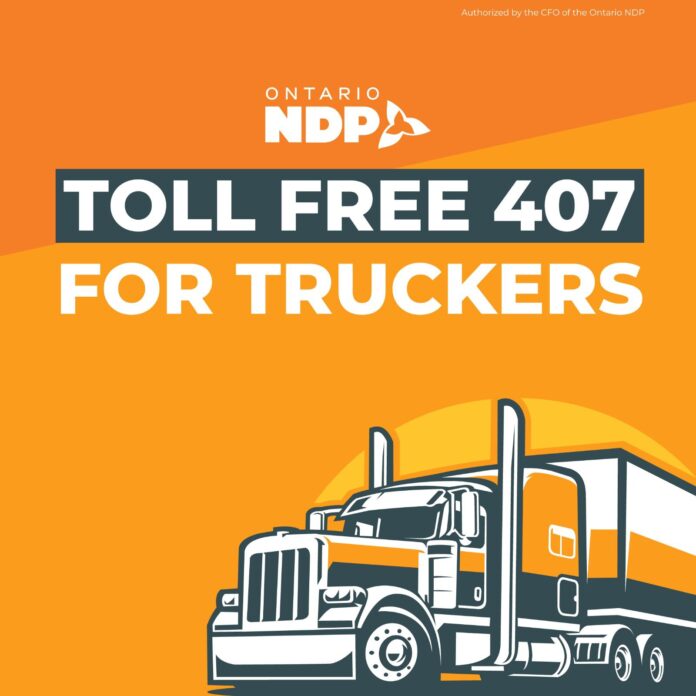 “People in Brampton face long, gruelling, expensive commutes,” said Gurratan Singh. “Truck drivers who use the 407 are being gouged daily — the money they shell out on tolls is money that should go to their mortgage or grocery bills.”

“All Brampton drivers deserve faster, cheaper commutes. By diverting truckers from 400-series highways to the 407, an NDP government under Andrea Horwath will reduce gridlock and ease commute times now — unlike Doug Ford’s $10-billion highway, which will take upwards of 10 years to build,” said Sara Singh.

Removing tolls on the 407 will save truckers thousands of dollars a month. A trip from Highway 427 to the QEW on the 407 costs over $60 for a heavy single use truck and over $90 for a heavy multi-unit truck. Under an NDP government, it would cost $0.

“The Conservatives privatized Highway 407, then Ford let the multi-billion-dollar 407 ETR corporations off the hook for the $1-billion penalty they owed Ontarians,” Navjit Kaur said. “That money should be used to help lower costs for regular folks in Brampton.”

Sandeep Singh stressed: “Steven Del Duca isn’t the answer. He was the Liberal minister in charge of the 407 and he did nothing to lower prices for drivers. The NDP will lower your auto insurance by 40 per cent, saving Bramptonians on average $1,725 per year.”

“Doug Ford is here to help his developer buddies get richer,” Andria Barrett said. “Andrea Horwath and the Ontario NDP are here for people—our plan will guarantee that Bramptonians have cheaper, faster commutes now.”

Instead of waiting 10 years for Ford’s controversial Highway 413 — which will cost $10 billion when combined with the Bradford Bypass — the NDP will reduce congestion now, and more affordably, by diverting between 12,000 and 21,000 trucks every weekday to the underutilized 407.

The NDP will finance the move by assessing the missed volume penalties Ford let the 407 ETR keep, recovering between $1 billion and $2 billion — more than enough to finance trucks and transport vehicles moving onto the 407 for 10 years.

Transport Action Ontario, which promotes the idea of moving transport trucks onto the 407 with free tolls, calculated the 30-year cost at $4 billion.