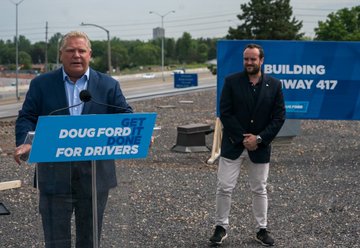 Today, Doug Ford announced that only a re-elected PC government will get shovels in the ground to expand Highway 417 and fight gridlock for Ottawa-area drivers and businesses.

“Just a few days ago, Steven Del Duca couldn’t help but say no to expanding Highway 417 when he admitted he wants another study,” said Doug Ford. “Drivers in Ottawa are tired of waiting, stuck in gridlock that’s only getting worse. Local businesses need better roads and highways so they can get goods to market faster. Only a re-elected PC government will get shovels in the ground to expand Highway 417.”

Highway 417 connects the Ottawa region to the 401 and serves as a key gateway for the area’s manufacturing and agriculture sectors. Highways 17 and 7 are also important corridors, connecting Ottawa to the North and Peterborough. During peak travel, the Queensway between the Highway 417 interchange and Montreal Road is often above capacity, leading to significant delays for commuters and economic costs in lost productivity for businesses. This gridlock also forces commercial trucks to travel through the downtown area, adding to local gridlock.

To relieve gridlock, a re-elected PC government will widen Highway 417 in the City of Ottawa to four lanes in each direction between Highway 416 and Maitland Avenue. The Ontario PCs will also rebuild five bridges on Highway 417 from Ottawa Road 174 to Walkley Road in Ottawa and widen Highway 17 from Arnprior to Renfrew to four lanes, which will increase capacity and improve road safety.

“Building highways has never been more important, with 75 per cent of eastern Ontario’s population growth in the next 30 years expected to happen right here in the Ottawa area,” added Ford. “Andrea Horwath and the NDP are happier protesting highways than building them. The Del Duca-Wynne Liberals will find any reason to say no with endless studies, reports and committees. Only the Ontario PCs will get it done and build Highway 417.”