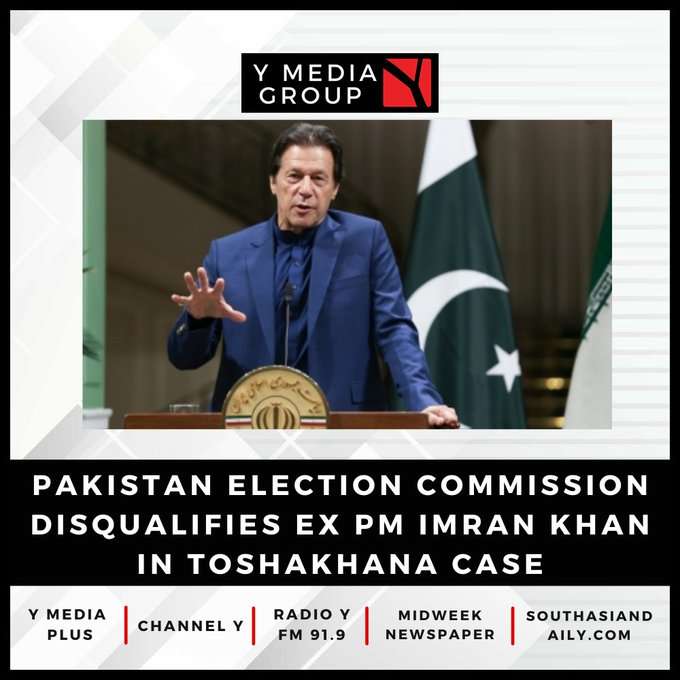 In a major legal victory for the ruling coalition government in Islamabad, the Election Commission of Pakistan (ECP), in a consensus verdict on Friday, disqualified former Prime Minister Imran Khan and ruled that the PTI chairman is no more a member of the National Assembly.

Rejecting the ruling, PTI leader Fawad Chauhdry said that it is an attack on 220 million Pakistanis.

The verdict was announced amid tight security in the capital city’s Red Zone where at least 1,100 police officials were deployed under the command of a senior superintendent of police to control the law and order situation in the area.

Geo News reported that the law enforcement agency was given teargas shells in case the party workers launch a protest.

According to a notice, the ECP had ordered all the relevant parties or their counsels to appear before the commission at its secretariat.

The poll body had reserved its verdict in the Toshakhana case on September 19 after arguments were completed from both sides. A five-member bench of the ECP, headed by Chief Election Commissioner Sikandar Sultan Raja, heard the case.

Toshakhana is a word of Persian origin that literally translates into “treasure house”.

A department under the administrative control of the Cabinet Division, it stores precious gifts given to the head of states, MPs, bureaucrats and officials by heads of other governments, states and foreign dignitaries.

According to Toshakhana rules, gifts and other such material received by persons to whom these rules apply shall be reported to the Cabinet Division.

During the last hearing of the case, which took place on September 19, Khan’s counsel Ali Zafar admitted that his client had sold at least four presents he had received during 2018-19.

“The gifts were sold for Rs58 million and their receipts were enclosed with the income tax returns filed by my client,” the lawyer apprised the ECP.

He maintained that Khan has provided the gifts’ details up to 2021 in the written reply submitted to the election body, Geo News reported.

“The ECP conducts scrutiny if the body has doubts on any details but in this case, the election body did not raise any objection,” argued the PTI lawyer.

An ECP member asked about the source of income for procuring the gifts from the state treasury.

At this, the lawyer said that he will not give the details to the Commission.