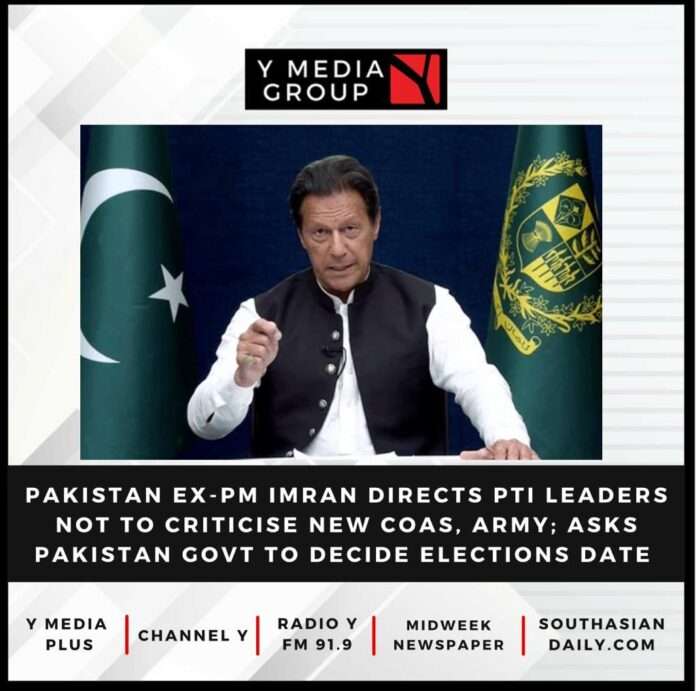 PTI Chairman Imran Khan on Friday invited the coalition government to hold negotiations with his party on the date of the election, warning them of dissolving the Punjab and Khyber Pakhtunkhwa assemblies otherwise, the media reported.

Citing the devastating economic situation as the reason behind PTI’s constant demand for fresh elections, Khan, in his address to the parliamentary party from his Lahore residence in Zaman Park, warned that the country is fast moving toward default, The News reported.

“If we do not head towards elections there won’t be stability in the country,” he warned, adding that the coalition government is not ready to talk about snap polls because they are scared of the results, The News reported.

Khan, who called off his long march to Islamabad last week had announced quitting assemblies across the country, including Khyber Pakhtunkhwa and Punjab.

The party’s leadership, according to PTI Senior Vice President Fawad Chaudhry, has approved the dissolution of assemblies in both provinces, but the final decision will be made after further consultations.

The former prime minister said that amid the ongoing political situation the PTI wasn’t bearing any losses, it was the Pakistan Democratic Movement-led government who was being accused of all the devastations.

Citing the credit default risk — which now stands at 100 per cent and was around 5 per cent during PTI’s tenure — Khan highlighted that investors and businessmen have lost faith in the coalition government as they have failed to present an economic road map, The News reported.

He lamented that overseas Pakistanis are reluctant to invest in Pakistan meanwhile the banks are refraining from giving loans to the local business community.

Former Pakistan Prime Minister Imran Khan has directed his PTI leaders and social media team to ensure that there is no criticism of the army and the new Chief of Army Staff (COAS) General Asim Munir.

According to a Pakistan Tehreek-e-Insaf (PTI) source, Khan in a WhatsApp group of party leaders and social media managers said: “Please ensure there is no criticism of the new Chief and Army Staff,” The News reported.

This direction of Imran Khan is a clear sign of the party’s effort to rebuild troubled relationships with the military establishment.

The PTI source said that following the appointment of Gen Munir as army chief, Khan also does not want any reflection of
what had happened between the two during his prime ministership, The News reported.

When approached, PTI senior leader Fawad Chaudhry did not confirm or deny Khan’s latest direction to his leaders and social media team but said that the party’s policy was not to have a confrontation with the institution.

On Wednesday, Khan in a tweet congratulated General Sahir Shamshad Mirza as new CJCSC and Gen Munir as the COAS.

“The new military leadership will work to end prevailing trust deficit that has built up in the last 8 months between the nation and the state. Strength of the State is derived of its people.”

According to sources, Khan initially had reservations about the appointment of Gen Munir as the army chief but later he changed his policy and said that he would have no objection no matter who was made the COAS.

During his premiership, Khan had prematurely removed Munir as DG ISI when the latter reportedly had informed the former about alleged corrupt practices of some people close to Khan, The News reported.