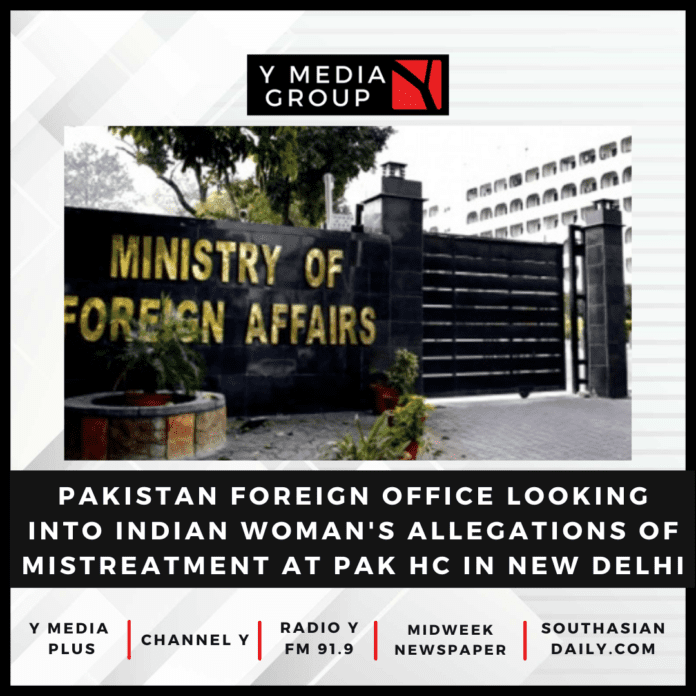 The Pakistan Foreign Office (FO) on Friday said it was “looking into” the allegation of indecent questioning by a member of its staff with an Indian woman at the Pakistan High Commission in New Delhi, adding that it “has zero tolerance for misbehaviour and mistreatment”, media reports said.

“We attach high importance to proper etiquette and behavior towards all visa and consular applicants.

“All our diplomatic staff is under strict instructions to conduct themselves professionally,” FO spokesperson Mumtaz Zahra Baloch said in a statement, the Dawn reported.

However, the FO spokesperson expressed surprise over the timing of the alleged incident and “the manner in which it has been raised”.

“There are robust mechanisms in place for the redressal of all public grievances,” she added, Dawn reported.

A Punjab based woman had accused two officials at the Pakistan High Commission in Delhi of molesting her when she visited the embassy for a visa last year while trying to lure her to write against the Indian government.

The woman also said that the officials even offered handsome remuneration to write articles which she refused.

The woman, who is a professor at a university in Punjab, talking to news channels said that she had booked an online visa appointment with the Pakistan High Commission and she had visited the embassy first in March 2021.

The woman has also filed a complaint with External Affairs Minister S. Jaishankar after she did not get any response from the Pakistan High Commission after raising the issue.

In her complaint, the woman said that she had to visit Lahore and deliver a lecture at Abbottabad University in Pakistan. However, the visa officer on March 15 denied her visa, citing a no-confidence motion moved against then-PM Imran Khan.

The woman was approached by a staffer on the pretext of another visa interview and took her to a room where he asked her about why she wasn’t married. How does she live without marriage, what does she do for sexual desires? she was allegedly asked.

The woman further said that she even wrote to Pakistan Foreign Affairs Minister Bilawal Bhutto, and also shared screenshots of the WhatsApp chat with the Pakistan High Commission staffer.