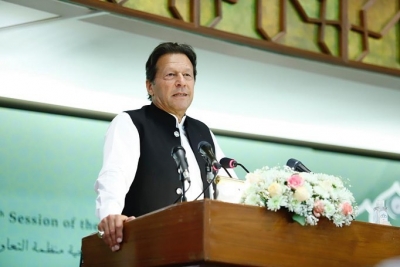 Former Prime Minister of Pakistan, Imran Khan once again praised India for buying discounted oil from Russia despite being a key member of a US-led Quad alliance.

“Despite being part of the Quad, India sustained pressure from the US and bought discounted Russian oil to provide relief to the masses,” Dawn news quoted Khan as saying in a tweet.

“This is what our government was working to achieve with the help of an independent foreign policy,” he added.

In a second tweet, Khan claimed that for his government, “Pakistan’s interest was supreme but unfortunately the local Mir Jafars & Mir Sadiqs bowed to external pressure, forcing a regime change and are now running around like a headless chicken with the economy in a tailspin”.

The former premier also tagged to his tweet a South Asia Index report, saying: “After buying discounted oil from Russia, the Indian government reduced petrol price by 9.5 rupees per litre, Diesel price has also been reduced by 7 rupees per litre.”

Michael Kugelman, a scholar of South Asian affairs at the Wilson Centre, Washington, also referred to this report, saying: “This is why Khan was praising India during his final days as Prime Minister.”

He pointed out that Khan wanted to import wheat and eventually gas from Russia, Dawn reported.