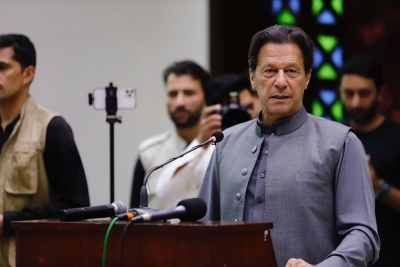 Former Pakistan Prime Minister PTI Imran Khan has slammed the coalition government for stalling the elections, saying that the delay is being done to “appoint an army chief of their own choice”.

Addressing his supporters during a party gathering in Faisalabad, the PTI Chairman said that the government has “destroyed the country within four months’ time”, Geo News reported.

He said that the government has only arrived in power to end corruption cases against itself.

Khan added that only free and fair elections can ensure political stability in Pakistan and the government was running away from doing so because they want to “install an army chief of their choice in November”, Geo News reported.

Following his routine, the former premier took a jibe at the government and said that the incumbent government was the “weakest administration ever.”

“According to the IMF, corruption is the root cause of poor economic conditions in the country,” he said, adding that the government has only done damage in four months.

“Inflation is skyrocketing, while the economy has fallen to the ground,” he remarked, reiterating his stance of conspirators imposing “thieves” on the nation.

“Today, the nation is seeking answers from those who have betrayed them,” he stated.