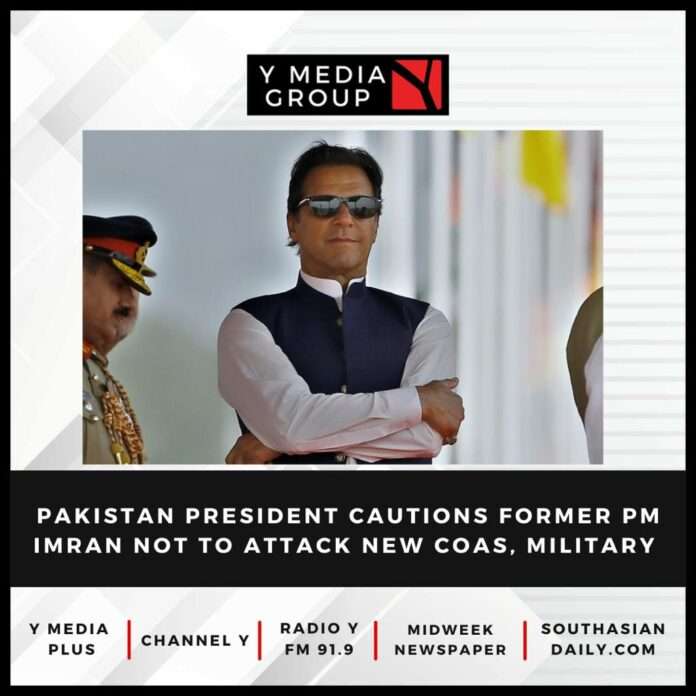 Former Pakistan Prime Minister Imran Khan was reportedly cautioned after the change of command in the army by President Arif Alvi to strictly direct his leaders and social media team not to attack the new Chief of Army Staff (COAS) and the military.

A PTI source while sharing a screenshot of a WhatsApp message conveyed to the party leadership and the social media team, claimed that President Alvi conveyed to Khan that under the new military establishment respect of the institution is like a “red-barrier”, which should not be crossed, The News reported.

The PTI’s leading spokesman Fawad Chaudhry when asked about the President’s reported message to Khan, said that both Alvi and the former premier were already clear that there would be no attack on the new military establishment and the army chief.

“There can’t be a perpetual fight with the institution,” The News quoted Chaudhry as saying.

He wondered why the PTI would criticise COAS General Asim Munir, because his appointment was facilitated by the PTI chairman.

He said that the new army chief brings new policy and the PTI hoped that what the military establishment under former COAS, Gen Qamar Javed Bajwa allegedly did to the PTI during the last 7-8 months would not be done now.

In that WhatsApp group of “PTI Parliamentary Party”, the message of Khan was conveyed. It said: “Chairman has directed all social
media not to attack the new COAS on any forum & above to be strictly followed.”

The person who shared the chairman’s message emphasised that everybody should be informed of Khan’s direction, The News reported.

This WhatsApp direction appears to be different from a similar message conveyed to PTI leaders and social media team recently as was reported in The News.

Regarding this message, a PTI source had told The News that Khan had directed party members and workers to “please ensure there is no criticism of the new Chief of Army Staff”.