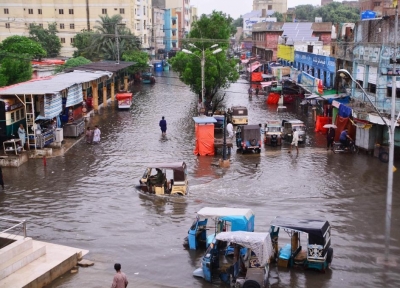 The Pakistan government has decided to launch an international appeal to help cope with the disastrous flood situation in the country which was triggered by incessant rainfall since July and have claimed the lives of 830 people so far.

This decision was taken during an urgent briefing on the flood emergency in Pakistan by the National Disaster Management Authority (NDMA) on Tuesday, reports Dawn news.

In addition to looking outward for assistance to mitigate the devastation caused by abnormal monsoon rainfall, Prime Minister Shehbaz Sharif also appealed to the nation to extend help to the flood-stricken people as the government required hundreds of billions to rehabilitate the victims.

“The current relief operation needs 80 billion PKR and hundreds of billions of rupees also required to overcome the losses as well as for rehabilitation of the victims,” Dawn news quoted the premier as saying in a video message.

Sharif said his government was already distributing 37.2 billion PKR as cash relief, whereas funds to the tune of 5 billion PKR had “immediately” been released to the NDMA to accelerate the rescue efforts.

He added that 5,000 PKR cash assistance was being paid to the flood victims.

According to the NDMA, 1,348 people were also injured in the floods that have rendered thousands of people across the country homeless.

Balochistan has the highest number of fatalities at 232, followed by Sindh with 216.

Meanwhile, the Pakistan Meteorological Department (PMD) has predicted more rains in various parts of the country from Wednesday onwards.

However, the monsoon activity is likely to subside from the weekend, Dawn news reported citing the weatherman as saying.

The Pakistan Meteorological Department has advised travellers and tourists to remain cautious during the forecast period.

The authorities concerned have been advised to remain alert and take necessary precautionary measures.

Share
Facebook
Twitter
Pinterest
WhatsApp
Previous article
Y Media Expresses Its Heartfelt And Deepest Condolences For The Demise Of Anmol Gupta, Son Of Gaurav Kumar (Planet Financial). With Deepest Sympathy, We Wish For Peace And Comfort During This Time Of Great Loss. May His Soul Rest In Peace!
Next article
Asia Cup: Laxman named as India’s interim head coach in Dravid’s absence