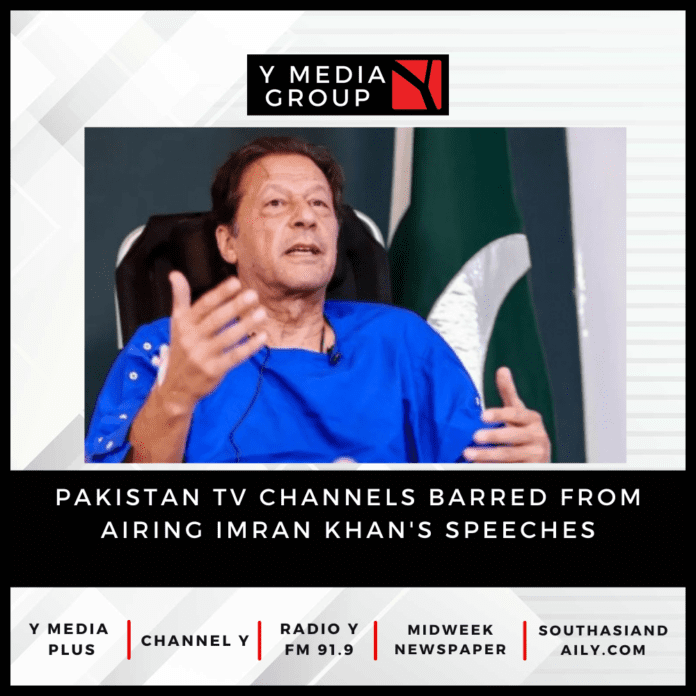 The Pakistan Electronic Media Regulatory Authority (PEMRA) on Saturday prohibited the broadcast and re-broadcast of speeches and press conferences by former Prime Minister and PTI Chairman Imran Khan on all satellite TV channels with immediate effect, a media report said.

A statement issued by PEMRA said that airing “hateful, slanderous, vilifying and unwarranted statements” against the country’s leadership and state institutions is in sheer violation of Article 19 of the Constitution, Express Tribune reported.

It said that Imran Khan has made aspersions against state institutions by levelling ‘baseless’ allegations of orchestrating an assassination plan, the report said.

“Contents of his speeches are being rebroadcast on various TV channels in their talk shows and news bulletins without any editorial oversight,” it observed.

PEMRA said that airing of such content is likely to create hatred among the people or is prejudicial to maintenance of law and order or is likely to disturb public peace and tranquillity or endangers national security and it is a serious violation of Article 19 of the Constitution and Section 27 of PEMRA Ordinance 2002 as well as Electronic Media Code of Conduct 2015.

It warned the licence of a TV channel can be suspended in case of violation without any show cause notice in the public interest along with other enabling provisions of law.

Addressing the nation for the first time after narrowly escaping an assassination attempt during the party’s long march in Punjab’s Wazirabad on Thursday, Imran had on Friday asked his party workers and supporters to continue protesting until three “accused” – prime minister, interior minister and an army officer – resign from their post.

Imran said to ensure an impartial and fair probe, it is necessary for the three top officials to step down as “all agencies are under their control”.

He also asked the army chief to make the senior military official resign whom he accused of being involved in the assassination attempt.