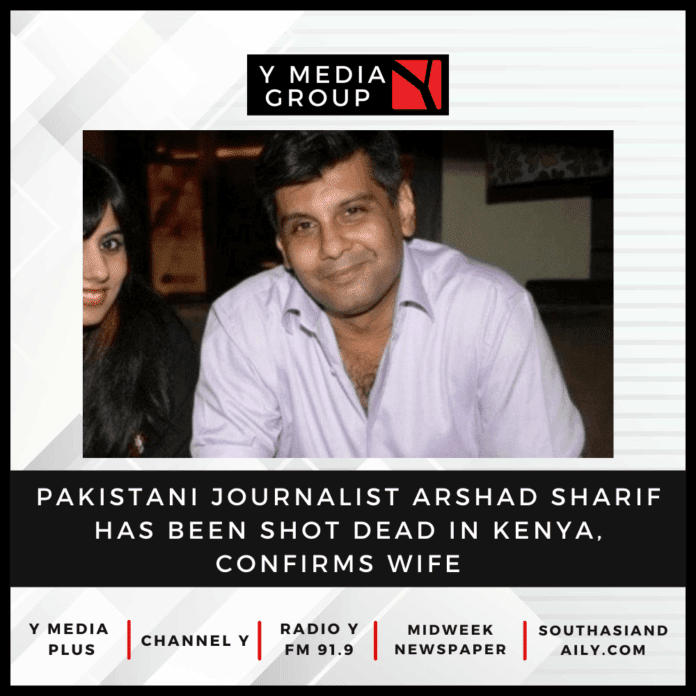 Pakistani journalist Arshad Sharif has been shot dead in Kenya, his wife confirmed on Monday.

Taking to Twitter, Sharif’s wife Javeria Siddique, said: “I lost friend, husband and my favourite journalist today, as per police he was shot in Kenya.

“Respect our privacy and in the name of breaking pls don’t share our family pics, personal details and his last pictures from hospital. Remember us in ur prayers.”

Condolences poured in from politicians and colleagues on the journalist’s death.

PTI Secretary General Asad Umar and Senator Azam Swati also said they were shocked and devastated by the news of the journalist’s death.

ARY News host Kashif Abbasi tweeted: “My brother, my friend my colleague Arshad Sharif was shot dead in Kenya..I still can’t believe it. It’s beyond heart breaking. This is just wrong.. This is painful.”

“Arshad Sharif, not just a colleague, a brother, is no more. From Islamabad to Moscow, from Dunya News to ARY, I’ve not known a finer gentleman. Shot dead. Too young. Too brutally,” Hum News anchorperson Meher Bokhari tweeted.

A day later, the Interior Ministry had cancelled the channel’s no-objection certificate citing “adverse reports from agencies” as the reason behind the decisionthat was later reversed after an order of the Sindh High Court.

The ARY Network had later announced it had “parted ways” with Sharif.