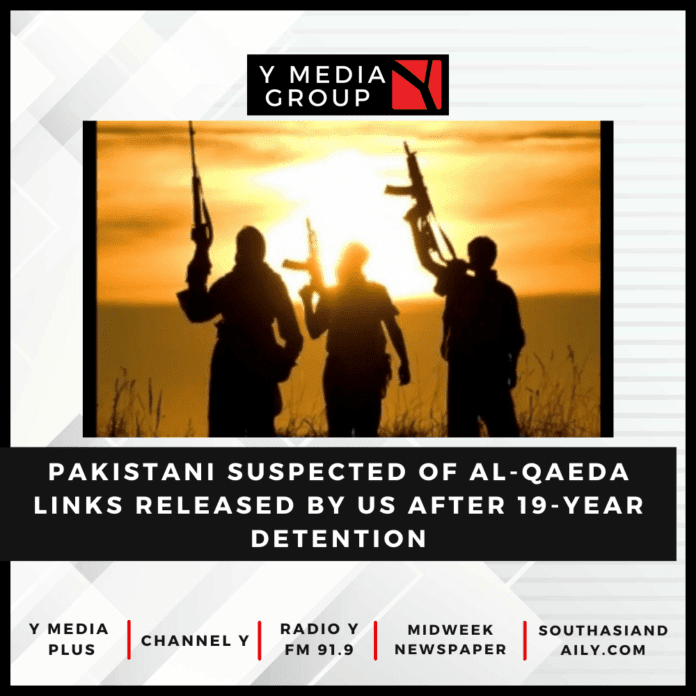 A Pakistani suspected of links to Al-Qaeda has been released after 19 years in US custody and sent back to his home country, the US Defence Department said on Saturday.

Saifullah Paracha, 75, spent 18 years in the notorious Guantanamo detention centre operated by the US on its military base in the island of Cuba, and a year before that in the Bagram US military prison in Afghanistan after his capture in Thailand in 2003.

He was not formally charged with a crime in a court or tried by a military commission like some of the others detained at Guantanamo Bay.

Paracha was among several people captured in Afghanistan, Pakistan and elsewhere in the aftermath of the 9/11 terrorist attacks by Al-Qaeda in 2001 on the New York World Trade Centre and the Pentagon in Washington using hijacked jetliners.

“It was determined that continued law of war detention of Saifullah Paracha was no longer necessary to protect against a continuing significant threat to the security of the US,” the Defence Department said.

“The US appreciates the willingness of Pakistan and other partners to support ongoing US efforts focused on responsibly reducing the detainee population and ultimately closing the Guantanamo Bay facility,” it added.

Pakistan’s Foreign Ministry said: “We are glad that a Pakistani citizen detained abroad is finally reunited with his family.”

The ministry said it had conducted “an extensive inter-agency process” for the repatriation.

Before Paracha’s capture in Thailand, his son Uzair had been arrested in New York and tried.

But Uzair Paracha’s conviction on charges of aiding terrorists and the sentence of 30 years was later overturned, based on new findings and he was sent back to Pakistan.

Saifullah Paracha who was educated in the US, was working as a businessman in Pakistan and had business interests in the US.

According to reports, he had been lured to Thailand by an offer of a business opportunity and seized on arrival.

One of his businesses was in the media sphere and he has admitted to approaching Al-Qaeda chieftain Osama bin Laden in public for interviews, but denied that he had been secretly in touch with him as alleged.

He was also accused by the US of financial involvement with Al-Qaeda.

The oldest prisoner while at Guantanamo Bay, he had needed special treatments for heart ailments.

The US government has been under pressure from human rights groups as well as from US lawmakers to shut down the Guantanamo detention facility and a review board was set up for vetting those detained to see if they can be released.

The board recommended Paracha’s release last year and it took more than a year to arrange the transfer to Pakistan.

The Defence Department did not say if any conditions were set for his transfer to Pakistan.

Detainees sent back to countries like Saudi Arabia had been put through a rehabilitation programme.

According to the Defence Department, 35 detainees remain at Guantanamo Bay and of them, three have been convicted by military courts and nine are under trial.