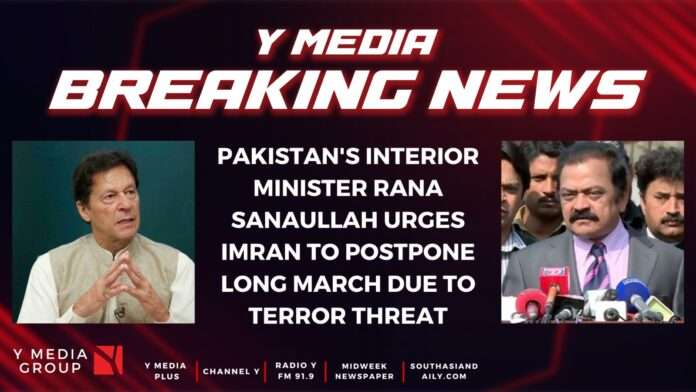 Sanaullah said that all intelligence agencies have issued security alerts for the PTI and its chief regarding the November 26 rally in Rawalpindi, adding that extremist parties may carry out terrorist attacks on PTI’s long march, Samaa TV reported.

“Security agencies have already issued a red alert in the city. Your own life is also under threat,” the minister said, as per the report.

“I also request PTI workers to refrain from participating in PTI’s [‘fitna’] march,” he said, adding that Khan can only get election date by engaging with political parties, not through long march Rawalpindi.

Sanaullah added that he has instructed the Islamabad IGP to ensure strict security arrangements at all the entry and exit points of PTI’s long march venue in Rawalpindi.

“The rally stage should be kept bulletproof at every cost,” he added.

Sanaullah added that if Khan wants a date for elections, he should “become a politician” first.

He said Khan can even meet Nawaz Sharif or Shehbaz Sharif for election date.

Sanaullah also urged Khan to come back to the Parliament so that the “country can move forward”.