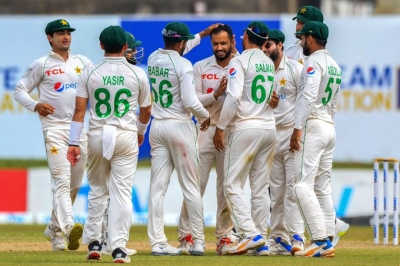 Pakistan’s remarkable victory over Sri Lanka in the first Test in Galle on Wednesday caused a major reshuffle within the top five on the World Test Championship standings.

Babar Azam’s side successfully chased down 342 runs to complete an extraordinary four-wicket triumph over Sri Lanka and in the process boosted their chances of appearing in next year’s World Test Championship final.

The win helped Pakistan jump in front of Sri Lanka and move into third place on the World Test Championship standings with a win-loss percentage of 58.33 percent, with only South Africa (71.43 percent) and Australia (70 per cent) now ahead of the Asian side.

On the other hand, Sri Lanka dropped three places to sixth on the standings with a 48.15 win-loss percentage. As a result, India improved one spot to fourth (52.08 per cent) and West Indies rose to fifth (50 per cent) ahead of the second Test between Sri Lanka and Pakistan in Galle next week.

A win in the second Test against Sri Lanka will see Pakistan make further ground on South Africa and Australia at the top of the standings, while a loss will see Babar’s side drop back to fifth.

Conversely, Sri Lanka can regain third place on the standings if they can recover quickly, fight back and level the series by winning the second Test.