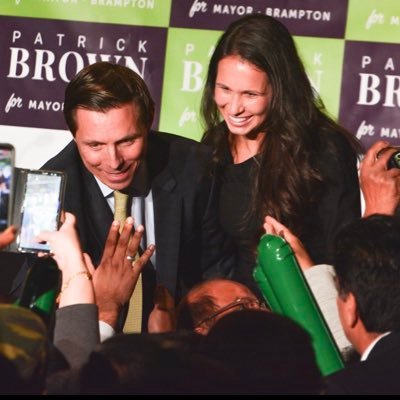 Patrick Brown will seek re-election for Brampton Mayor after getting disqualified from the federal Conservative leadership race.

The former Ontario PC leader and three-term MP gathered with his wife, two children, and supporters on Brampton City Council to submit candidacy papers at the city clerk’s office.

“I just wanted to inform everyone that after talking to my family, we’ve decided to put my name in again for Mayor of Brampton,” Brown said at the news conference.

“I will be loud, and I will be heard to make sure Brampton residents are never shortchanged.”

After his disqualification, in an exclusive interview with Y Media’s Group Editor & CEO Yudhvir Jaswal, Patrick Brown said, “there was no wrongdoing” in his federal campaign. He mentioned, “unfortunately, the Conservative Party did not want a free and fair election. We’re pursuing legal options to ensure what was done is exposed.”

However, during the press conference, he stressed that he’s “not going to be involved in the leadership campaign anymore; my focus is going to be creating a great team here in Brampton.”

“I’m moving on from that chapter and now just focused on making sure that I can give every opportunity to the residents of Brampton.”

He said, “it’s been the greatest privilege to serve the city over the last four years, and I’m looking forward to the next four years.”