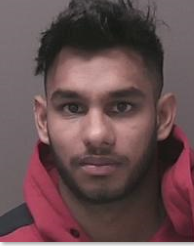 Investigators from the 21 Division Criminal Investigation Bureau have identified two suspects and seek the public’s assistance with identifying three other people in an Attempt Murder investigation in the City of Brampton.

On Saturday, April 16, 2022, at approximately 12:50 a.m., two men in their 20’s, were with friends at a business located in the area of Bramtree Court and Chrysler Drive in Brampton. Upon leaving, the two victims became involved in a verbal altercation with another male and assaulted with weapons. The suspects fled the scene before police attended. One of the victims was transported to a trauma centre where his injuries were determined to be life-altering. The second victim was transported to a local hospital where his injuries were considered non-life-threatening.

Investigators from the 21 Criminal Investigation Bureau identified two suspects believed to be involved in this incident. On April 18, 2022, arrest warrants were issued for 24-year-old Gurkirat Singh and 25-year-old Manjot Singh, both from Brampton. On April 25, 2022, Gurkirat Singh along with his legal counsel, attended 21 Division, was held for a bail hearing and appeared before the Ontario Court of Justice in Brampton. He was charged with Attempted Murder, Assault with a Weapon and Assault Cause Bodily Harm.

Investigators continue to search for Manjot Singh and encourage him to seek legal counsel and turn himself in. In addition, investigators seek to identify three individuals believed to be involved in this incident.

In addition, investigators seek to identify three individuals believed to be involved in this incident.

Anyone with information is asked to call investigators at the 21 Division Criminal Investigation Bureau at 905-453–2121, extension 2133. Information may also be left anonymously by calling Peel Crime Stoppers at 1-800-222-TIPS (8477).