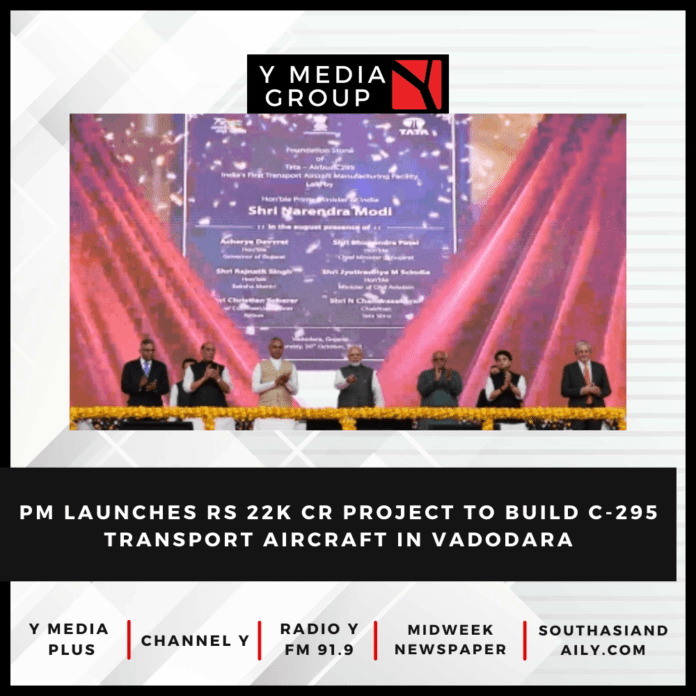 Prime Minister Narendra Modi on Sunday laid the foundation stone for a C-295 transport aircraft manufacturing plant here, expressing hope that soon passenger aircraft will be manufactured in India with the ‘Make in India’ tagline.

The C-295 transport aircraft for the Indian Air Force (IAF) will be manufactured by Tata-Airbus with an investment of Rs 20,000 crore.

Speaking on the occasion, the Prime Minister said that along with the manufacturing of transport aircraft for the IAF, additional aircraft too will be manufactured at the facility for Air Force requirements, adding that aircraft manufactured here will also be exported in the future.

“Today, a message is being sent to the world that there is a golden opportunity in India. Defence and aerospace are going to be the two important pillars for ‘Aatmanirbhar Bharat’,” Modi said, as he expressed hope that by 2025, the country’s defence manufacturing scale will cross $25 billion with defence corridors being developed in Uttar Pradesh and Tamil Nadu.

“India is fast becoming a hub of defence equipment manufacturing. Today we are manufacturing tanks, submarines, and soon transport aircraft will be added to the list. Medicines and vaccines manufactured in India have saved the lives of millions of people across the globe,” Modi said.

Earlier, Modi kicked off his three-day visit to Gujarat with a 4.5 km road show in Vadodara, for which hundreds of people turned up to have a glimpse of the Prime Minister.

The first 16 fly-away C-295MW aircraft are scheduled to be received between September 2023 and August 2025. The first ‘Make in India’ aircraft is expected from September 2026.

C-295MW is a transport aircraft of 5-10 tonne capacity with contemporary technology that will replace the IAF’s ageing Avro aircraft. It has a rear ramp door for quick reaction and para dropping of troops and cargo. Short take-off/landing from semi-prepared surfaces is another of its features. The aircraft will strengthen the logistic capabilities of the IAF.

This is the first project of its kind in which a military aircraft will be manufactured in India by a private company. The total cost of the project is Rs 21,935 crore. The aircraft can be used for civilian purposes as well.

The aircraft will be flight tested and delivered through a Delivery Centre at the Tata consortium facility.