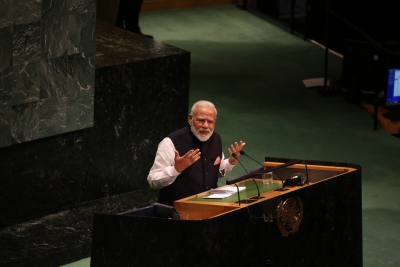 Prime Minister Narendra Modi is not scheduled to be at the high-level United Nations General Assembly session in September when presidents and prime ministers throng here, according to the roster of speakers which instead lists External Affairs Minister S. Jaishankar as India’s speaker.

In a sign of the world emerging from the grip of the Covid-19 pandemic, all the speeches will be in person at this year’s session that begins on September 20, Paulina Kubiak, the spokesperson for Assembly President Abdulla Shahid, said on Wednesday.

The high-level session went all virtual in 2020 and turned hybrid in 2021 with some speaking remotely and others like Modi attending in person.

The leaders are scheduled in a hierarchical order starting with the 101 heads of state, followed by prime ministers, the deputies, the ministers and others.

In this scale, Jaishankar as a minister gets a slot towards the end of the fifth day’s morning session after about 2 p.m. local time (11:30 p.m. in India) on September 24. (Sometimes countries have the scheduling adjusted to coincide with convenient broadcast times at home.)

Hungary’s Csaba Korosi, who takes over from Shahid, will be the preside over the session.

Volodymyr Zelensky, the President of Ukraine, which will take up a chunk of the session’s bandwidth, is scheduled to be at the meeting.

His nemesis Russia’s President Vladimir Putin is staying away and Foreign Minister Sergey Lavrov is the listed speaker.

The acute global food insecurity and energy shortages resulting from the Russian invasion of Ukraine are other topics expected to dominate the session.

The UK’s Prime Minister – whoever is elected in early September – has a spot on the roster.

The Taliban regime, which is not recognised by any country, does not have a slot, nor does anyone from the government of ousted President Ashraf Ghani, which still in effect holds the country’s seat at the UN.

But Kyaw Moe Tun, Myanmar’s permanent representative from the democratically elected government of Aun San Suu Kyi’s party still represents the country at the UN and is listed as the speaker for the country.

Following a long-established tradition that gives the opening slot to Brazil, its President Jair Bolsonaro is to be the first speaker followed by US President Joe Biden.

Prime Minister Modi has addressed the General Assembly four times in person and once by video. He skipped the meeting in 2016, 2017 and 2018.

In his speech in 2021, the Prime Minister extolled India’s democratic credentials, calling it “the mother of democracies”.

It was seen as a riposte to lectuing by US Vice President Kamala Harris in Washington on the eve of the speech.

He laid out the parameters of his foreign policy of assertive independence going beyond the traditional concept of nonalignment in his first address in 2014.