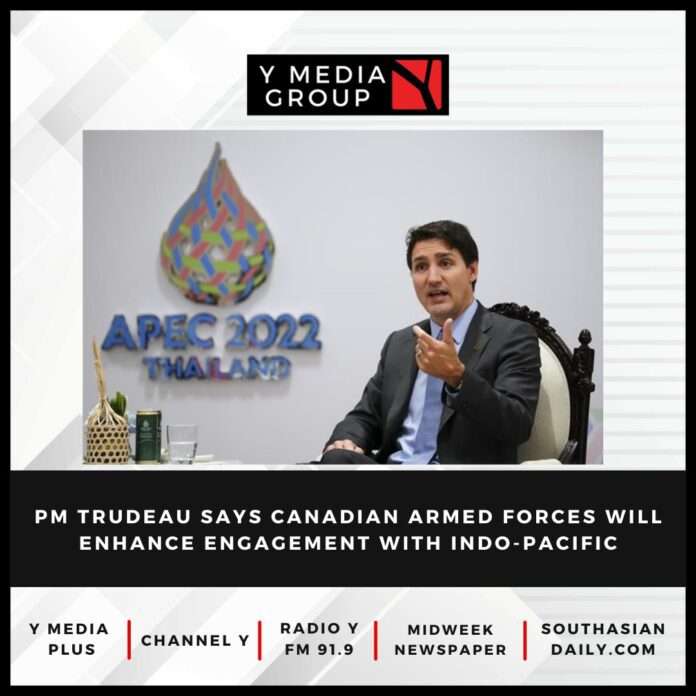 The Prime Minister, Justin Trudeau, concluded his participation in the Asia-Pacific Economic Cooperation (APEC) Economic Leaders’ Meeting hosted by Thailand, where he positioned Canada as a strong partner to grow and diversify trade to create good, middle-class jobs on both sides of the Pacific, and strengthen ties between our people.

During the various APEC Leaders’ working sessions, including a session with the APEC Business Advisory Council, the Prime Minister promoted the expansion of regional market access, trade, and economic growth opportunities in the Indo-Pacific. He underlined Canada’s unique contributions to the region – as an energy security partner, a safe source of agriculture and agri-food, and a reliable exporter of natural resources, including the critical minerals needed in the clean energy transition. He also encouraged leaders to make ambitious commitments and investments that foster clean economic growth, and advance women’s economic empowerment.

As part of the upcoming release of Canada’s Indo-Pacific Strategy, the Prime Minister announced the following measures to expand trade, investment, and supply chain resilience in the Indo-Pacific to benefit people in the region and Canada alike:

The Prime Minister also announced an investment of $13.5 million to expand natural resource ties with Indo-Pacific partners – in trade, investment, and science, technology and innovation. This investment will help countries on both sides of the Pacific transition to a clean economy by sharing and expanding Canada’s expertise, including the sustainable development of critical minerals, and supporting the Canadian energy sector and its workers for generations to come.

While in Thailand, Prime Minister Trudeau endorsed the Bangkok Goal Declaration on the Bio-Circular-Green (BCG) Economy, a trade and investment model in support of the energy transition, ensuring that member economies remain environmentally and socially responsible when conducting business.

Throughout his meetings, the Prime Minister expressed his concern at the economic impact of Russia’s illegal invasion of Ukraine, which has created significant threat to global peace and stability. In the face of wider impacts caused by the invasion, including on food and energy security, global supply chains, and post-pandemic economic recovery, he underscored the importance of a united response to overcome the conflict’s impact on economic growth in the region.

“By opening new markets and opportunities for Canadian businesses, innovators, and entrepreneurs, and attracting investment to Canada in sectors like clean energy that will define the global economy, we are building an economy that works for all Canadians. I look forward to working with fellow APEC leaders to build on our success, and create even more opportunities for Canadians and all people in the Indo-Pacific region,” PM Trudeau said.

Following North Korea’s recent series of missile tests, including the suspected launch of an intercontinental ballistic missile on Friday, Prime Minister Trudeau participated in a security meeting convened by the Vice-President of the United States of America, Kamala Harris, on the margins of the APEC Economic Leaders’ Meeting. He was joined by the leaders of South Korea, Japan, New Zealand, and Australia. The Prime Minister strongly condemned Pyongyang’s provocation and called for continued international coordination to address the threat posed by North Korea’s ongoing nuclear and ballistic missile programs.

At the APEC Economic Leaders’ Meeting, the leaders issued a joint declaration highlighting priorities and commitments to inform APEC’s future work agenda and the members’ commitment to work with partners to build an economy that works for people on both sides of the Pacific.