Poll finds over half of Tory members want UK PM Truss to quit, Boris Johnson favourite to take over 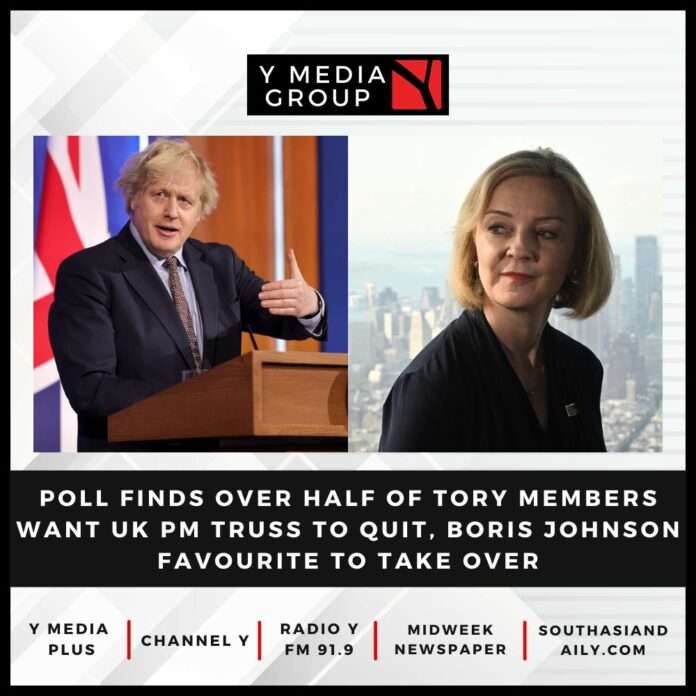 Liz Truss suffered a fresh body blow on Tuesday as a poll found more than half of Tory members want her to quit, with Boris Johnson emerging as the favourite to take over, a media report said.

A bombshell YouGov survey revealed that four in five party activists think the PM is doing a bad job and 55 per cent are convinced she should go, compared to just 38 per cent who back her staying, Daily Mail reported.

Her predecessor Johnson is the preferred option as a replacement, with 32 per cent supporting him while 23 per cent said Rishi Sunak and 10 per cent Ben Wallace.

The brutal findings emerged as the PM held two hours of talks with the Cabinet. Transport Secretary Anne-Marie risked setting another hare running by appearing to answer ‘probably’ when asked if ministers have confidence in the premier, Daily Mail reported.

MPs are considering whether and how to stage a coup in the wake of Jeremy Hunt’s extraordinary demolition of her flagship economic plans.

Having stubbornly failed to do so when she sacked Kwasi Kwarteng on Friday, Truss belatedly apologised for the debacle on Monday night in a BBC interview, conceding she had made ‘mistakes’ and gone ‘too far too fast’.

A nervous-looking premier vowed that she will lead the party into the next election.

She gave a similar message to the One Nation group of MPs on Monday night. But Tories who attended compared it to a ‘corpse delivering its own eulogy’.

Senior backbencher Simon Hoare warned on Tuesday that the party might need to focus on “avoiding a landslide defeat”, with polls showing Labour 36 points ahead.

Defence minister James Heappey insisted that Truss had apologised more quickly than Boris Johnson did, but also signalled problems ahead as he warned he will quit if she cuts funding for the military.