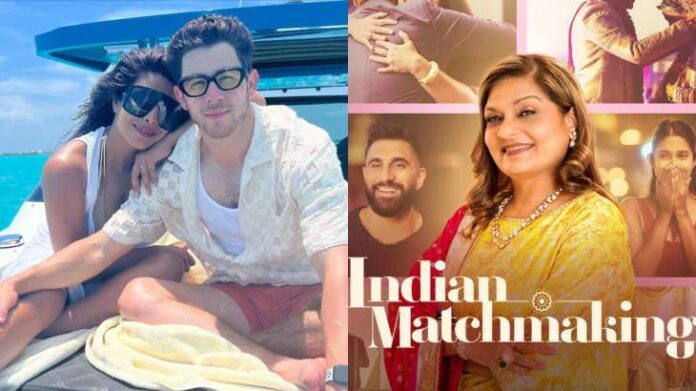 Priyanka Chopra-Nick Jonas might be couple goals for millions across the world, but Sima Taparia of Indian Matchmaking doesn’t feel they make a good pair. In fact, she advises her clients not to follow their suit. Indian Matchmaking returned to Netflix for season 2 and Sima was back as well pairing men and women and finding ideal matches for them.

On the show, she is seen speaking to a client named Nadia Jagessar. She teller the matchmaker that she is attracted to a guy, Vishal, whom she recently met at a party and wants to pursue it further. However, Sima tells her that Vishal is younger than her and she should not marry a man who is more than two-three years younger than her. When Nadia gave Priyanka and Nick’s example, Sima went on to say that she doesn’t like the pair either.

“Two-three years okay, but seven years younger…I mean, they’ll not be…because they’ll have a difference. Matureness is very important. You are more mature because you are seven years elder. So I think we’ll drop Vishal.” Nadia’s mother Namita joined in the conversation saying, “I think if the guy is seven years older, it’s okay. But for the girl to be seven years older, I don’t know. Maybe I’m old-fashioned.”

On hearing Priyanka and Nick’s example who have an age gap of 11 years, Sima told Nadia, “But I don’t feel it’s a good match. Sorry to tell that. They have married, but it’s not a good match. He looks so small and petite in front of her, and she looks elder.”

For the unversed, after a whirlwind of romance, Priyanka and Nick married each other in a Christian and a Hindu ceremony in Jodhpur’s Umaid Bhawan Palace on December 1 and 2 in 2018. Later, the couple also hosted two receptions in Delhi and Mumbai.