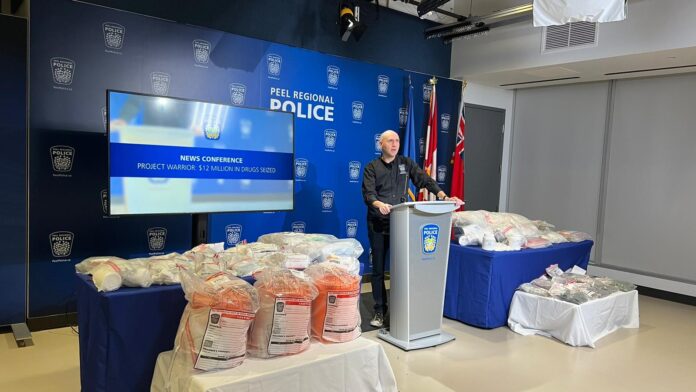 In 2021, investigators from the Peel Regional Police Specialized Enforcement Bureau commenced an investigation into an organized group of individuals trafficking large amounts of illegal and controlled drugs. The identified group has strong ties to the Mississauga and Brampton areas.

Through the Proceed of Crime Front Line Policing Grant, Gang Related Intervention Team funding provided by the Ministry of the Solicitor General of Ontario and the Criminal Intelligence Service Ontario, it supported Peel Regional Police’s investigation, which was aimed at investigating the various members of the group and their involvement in drug trafficking throughout the Region of Peel and the GTA.

The investigation yielded the following:

The following parties have been charged in relation to this investigation:

Phi HO, a 35-year-old man of Kleinburg, is charged with the following offences:

Quang-Thai Ho, a 38-year-old man from Toronto, is charged with the following offences:

Quan-Binh HO, a 37-year-old man from Toronto, is charged with the following offences:

Iman Pazirandeh, a 30-year-old of Toronto, is charged with the following offences:

Anyone with any information is asked to contact the Specialized Enforcement Bureau at 905-453-2121, extension 3515. Information may also be left anonymously by calling Peel Crime Stoppers at 1-800-222-TIPS (8477) or by visiting www.peelcrimestoppers.ca.