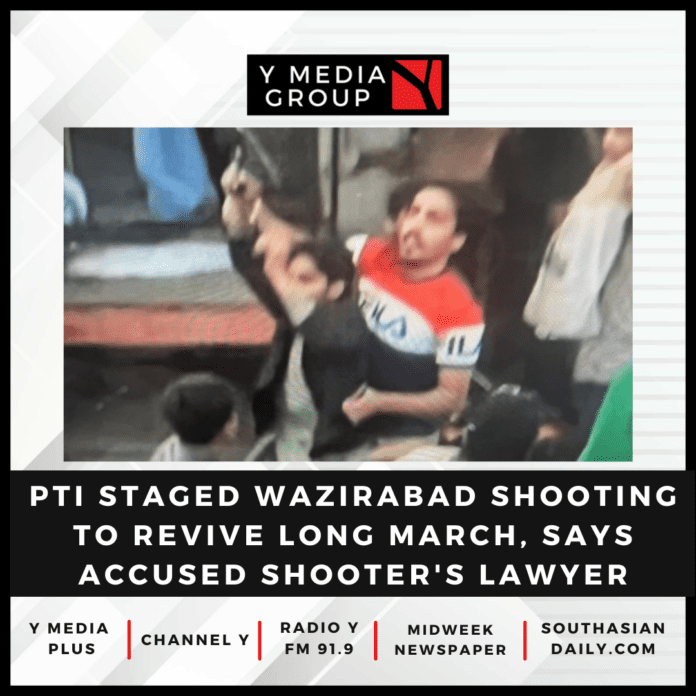 The lawyer of the alleged lone shooter arrested for opening fire on Pakistan Tehreek-e-Insaf (PTI) Chairman Imran Khan in Wazirabad in November last year, on Thursday accused the PTI of choreographing the shooting to give their dying ‘long march’ a new lease on life, media reports said.

“The JIT is not considering substantial evidence a part of the investigation; the JIT and Imran Khan conspired to spoil the case and are trying to tamper with the details of the case in the police diary,” he added, Geo News reported.

Dawood also said that there is no need to extend the accused’s remand.

“Authorities are trying to force the accused to make a statement of their choice by making his mother sit in front of him in extremely cold weather,” Dawood said.

Dawood also alleged that PTI is refraining from going to court because they staged the incident.

“They do not accept that Imran Khan has suffered any injury in the Wazirabad attack as these people (PTI) are quick to tell lies,” he said and added, “PTI staged the Wazirabad incident to add life to the long march,” Geo News reported.

Dawood said they are considering prosecuting Imran Khan and his guard for PTI worker Moazzam Gondal’s ‘murder’. The PTI delayed the FIR for 30 days, said Dawood, adding that Moazzam’s murder could not be pinned on Naveed.

Moazzam was the sole fatality in the alleged assassination attempt on Khan in Wazirabad.

“They (PTI) have been talking about the second and third shooters since yesterday, but Imran Khan’s guard’s weapon killed Moazzam. However, they did not give the guard’s weapon for forensics,” Dawood claimed.

The Vice President of PTI, Fawad Chaudhry, had claimed on Wednesday the investigation has proved that three assailants were involved in the assassination attempt on Khan.

Chaudhry added that Khan’s guards fired no shots, and three types of weapons were used in the attack, i.e., three attackers. The plan was to kill Khan and spread chaos, he added, Geo News reported.