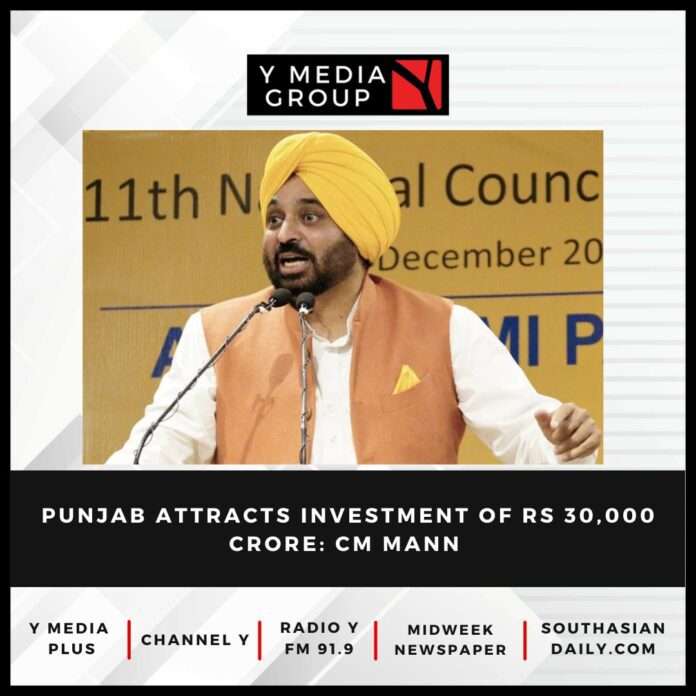 Punjab Chief Minister Bhagwant Mann on Friday said due to ease-of-doing business policies, an investment of Rs 30,000 crore has been firmed up in the last nine months, which will create new employment opportunities for thousands of youngsters.

“Big industry houses like Tata Steel, Verbio, Freudenberg and Sanathan Textiles have entered into agreements to invest by reposing faith in our industrial policies, which will provide jobs to our youth,” he said while handing over appointment letters to the newly-recruited candidates at Markfed and launching new products here.

Referring to the recent meetings with industrialists in Hyderabad, Mann said the entrepreneurs associated with food processing and agriculture have shown keen interest in investing in Punjab, which will further strengthen the industrial sector of the state.

“Where there is a will, there’s a way as now the industrialists do not have to face the corrupt and intricate process to invest in the state.”

Mann said subsequently the industrialists are coming to Punjab. “We have eliminated corruption, provided uninterrupted power supply to the industry and a conducive environment and now our efforts are bearing fruit.”

On the other hand, the Chief Minister said in order to set up industries during the previous regimes, industrialists had to negotiate with the families of political clout. Earlier, the agreements were made with families but now industrialists are signing MoU (memorandum of understanding) with the state.

Mann envisioned that with strenuous efforts of the government, Punjab will soon emerge as industrial hub of the country.

Lashing out at the opposition for making a hue and cry over the alleged deteriorating atmosphere in Punjab, the Chief Minister said the leaders of the Opposition parties were deliberately defaming him in the Parliament or in public functions as his government has exposed the designs of the previous governments to loot the state.

Mann said he was being opposed as he was not like his predecessors who had plundered the wealth of the state. He said throughout his life he had worked for the wellbeing of Punjab and its people.