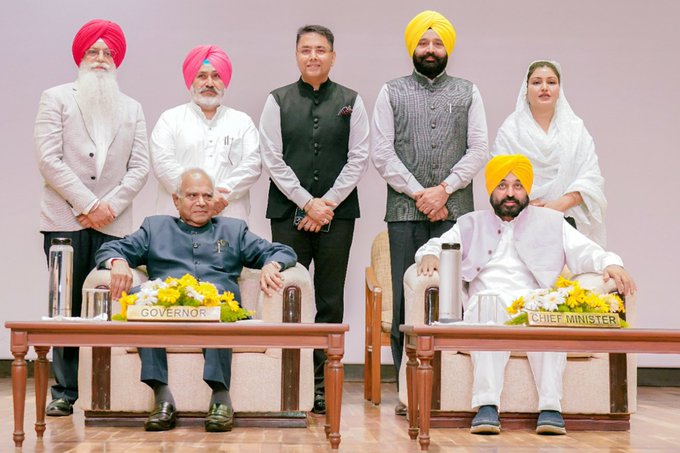 The expansion came in less than four months of the Aam Aadmi Party (AAP) sweeping to victory in the Assembly elections by winning 92 seats of the 117 seats.

Governor Banwari Lal Purohit administered the oath to the five new ministers in the presence of the Chief Minister.

With their induction, the total strength of the council of ministers rose to 15, including the Chief Minister. There are still eight vacancies.

Arora, the second time legislator from Sunam and who recorded the highest victory margin of 75,277 votes, was the first person to take oath of office and secrecy, followed by Amritsar South legislator Inderbir Singh Nijjar, who was the pro tem Speaker, Guru Harsahai legislator Fauja Singh Sarari, who belongs to the Rai Sikh community, Samana legislator Chetan Singh Jouramajra, and Kharar legislator and singer-turned-politician Anmol Gagan Mann, who was the party’s youth wing President.

The order of taking oath was per their seniority in the Cabinet.

In an unprecedented action against corruption, Health Minister Vijay Singla was sacked from the state Cabinet on May 24 and arrested on corruption charges with Chief Minister Mann saying his government has zero tolerance towards corruption.