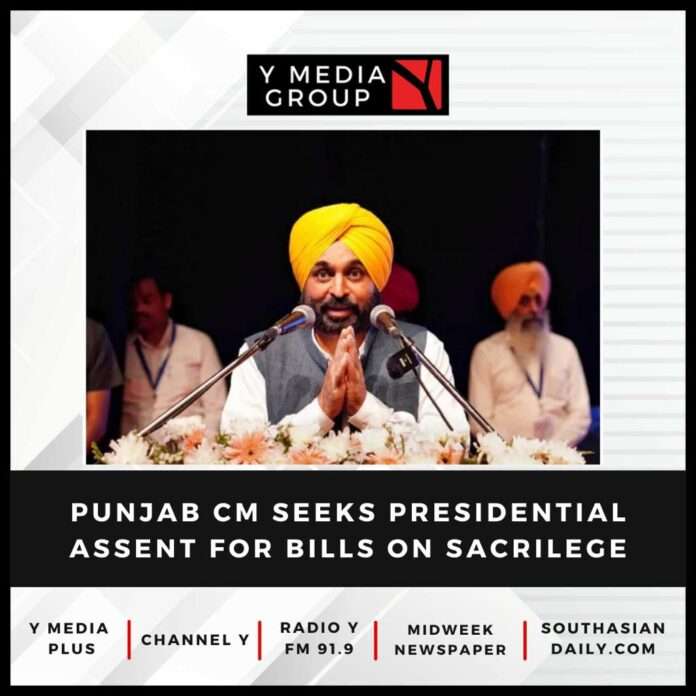 Punjab Chief Minister Bhagwant Mann on Friday called on Union Home Minister Amit Shah here and sought the intervention of the Centre for getting Presidential assent for two important pending Bills of state stipulating harsher punishment for the perpetrators of heinous crime of sacrilege.

Mann apprised the Home Minister that the state Assembly had passed The Indian Penal Code (Punjab Amendment) Bill, 2018 and The Code of Criminal Procedure (Punjab Amendment) Bill, 2018, which stipulates punishment up to life imprisonment for injury, damage or sacrilege to Sri Guru Granth Sahib, Srimad Bhagwatgita, Holy Quran and Holy Bible with the intention to hurt the religious feelings of the people.

The Chief Minister said this amendment is in consonance with the principles of secularism enshrined in the Constitution. However, he said these Bills have been pending for assent of the President since October, 2018.

Asserting that Punjab, being a border state, it is necessary to maintain communal harmony, Mann sought the kind intervention of the Union government for getting early Presidential assent for the Bills as rigorous punishment is required to deter criminals trying to disturb communal peace and brotherhood in the state.

Flagging another important issue, the Chief Minister said as per international norms, construction can be made beyond 150 metres of Zero Line but at some places in Punjab, the border security fence is at a large distance away from the Zero Line.

Mann said as a huge chunk of farming land lies between the international border and the existing fence, so a number of farmers, who have to go across the border fence to cultivate land, face a lot of hardships on a daily basis.